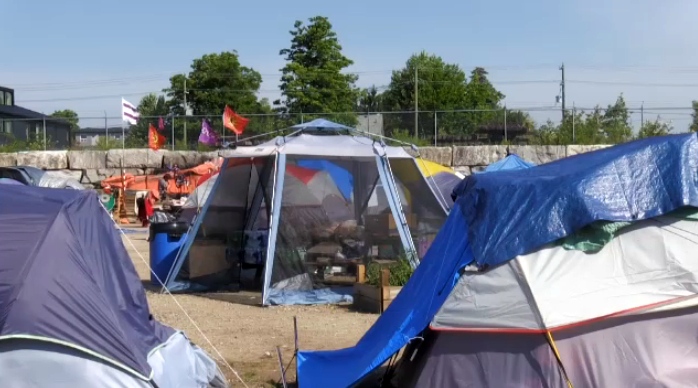 The Region of Waterloo says it has delivered portable washrooms to the encampment at the corner of Victoria and Weber streets and will implement 24/7 security at the site.

Encampment residents have had round-the-clock access to the washrooms across the street at St. John’s Kitchen since the spring, following calls from people living at the site to improve sanitation there.

In an email, Peter Sweeney, commission of community services, said with the delivery of the portable washrooms Thursday morning, after-hours access to the facilities at St. John’s Kitchen will be discontinued.

“The needs of the site at 100 Victoria have changed since the original decision was made in April to provide after-hours washroom access at St. John’s Kitchen,” Sweeney said in part.

The portable washrooms will ensure “the health and well-being of those on the site and in the surrounding area,” he added.

Sweeney also said starting Thursday, security staff will be at the encampment 24 hours a day, seven days a week “in response to ongoing concerns and incidents reported from neighbouring businesses and residents and in order to facilitate the safe provision of portable washrooms at the site.”

The region has said there are more than 60 tents on the downtown property.

In June it issued eviction notices to the people living there saying everyone had to leave by June 30. When that day came and went and the camp remained intact, the region took the matter to court. The region’s case to evict the encampment is set to be heard in November.