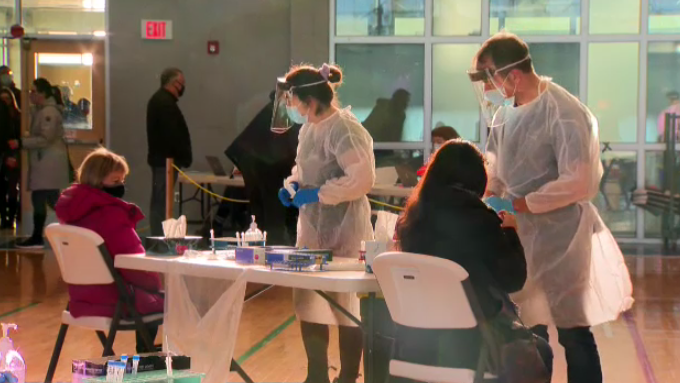 Health officials are reporting nine new cases of COVID-19 in Waterloo Region, the first time the daily increase has been in single digits since October.

For the second straight day, no cases have been identified as variants of concern.

The number of related deaths, hospitalizations, and those being treated in the ICU have all remained unchanged.

An outbreak at an unnamed trades and services facility has been declared over, bringing the number of active outbreaks in the area down by one as well.

On the vaccination front, 5,111 doses were administered in Waterloo Region and Saturday, bringing that total to 736,952.

The per cent of the eligible population (12 years old and older) that have received one dose now stands at 81.36 per cent, while per cent who are fully vaccinated stands at 64.63 per cent.

In Ontario, health officials are reporting 172 new cases of COVID-19 on Sunday with two additional deaths. The province’s virus-related death toll stands at 9,313.

Another 144 people recovered from the disease yesterday, resulting in 1,450 active cases across the province.

The province said it administered 103,812 doses of COVID-19 vaccines Saturday, with over 18.9 million needles having gone into arms in the past seven months now.

As of Sunday, 8,569,752 people have received both doses and are considered to be fully vaccinated.

With just three days now until the federal election, the main party leaders will be keeping the campaign throttle wide open today as they chase any still undecided votes in Ontario, Quebec and Nova Scotia.

Lots of planning, data go into planning where leaders visit during a campaign

With only four ridings, Hamilton, Ont. doesn't have the electoral bounty of Toronto, Vancouver or Montreal. But depending on who you talk to, all four Hamilton ridings could be in play, and in close races, the leader's appearance can generate a needed bump.