Health officials are starting to see signs new cases of COVID-19 are plateauing in Waterloo Region, but Medical Officer of Health Dr. Hsiu-Li Wang warned the region is “at very precarious moment" at a weekly COVID-19 update on Friday.

Community spread remains high and even as case numbers stabilize, it will take several weeks for the impact to be felt at local hospitals, Dr. Wang said.

"Our hospitals are facing their most challenging times yet," she said.

On Thursday, Grand River Hospital in Kitchener announced it was asking recently retired staff to return to work amid record-breaking staffing and capacity shortages.

Wastewater signals, which health officials use as a proxy to gauge COVID-19 cases in the community, are still at their highest levels but are starting to plateau, Dr. Wang said. 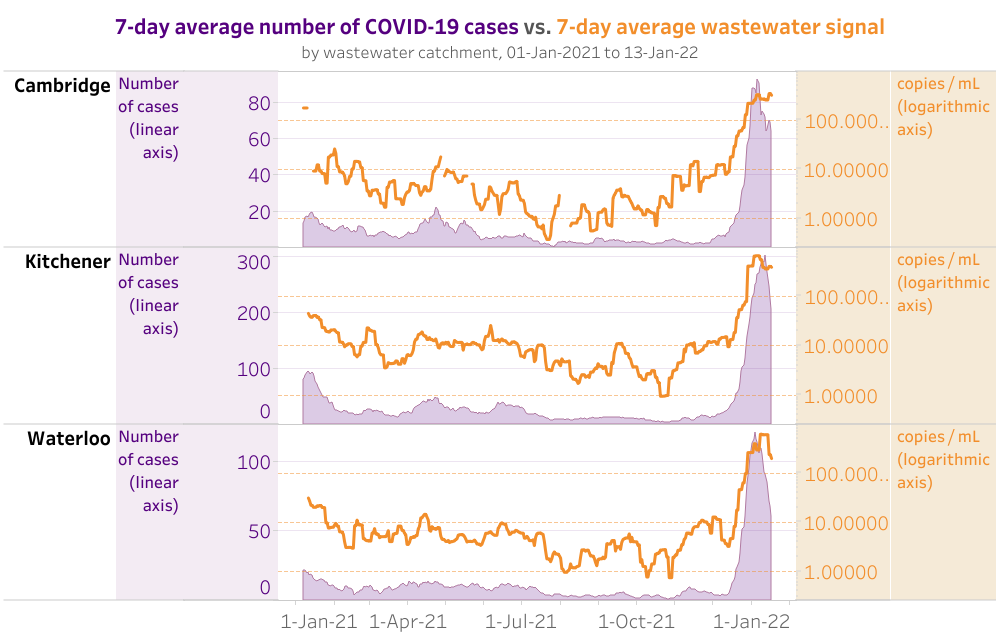 The region's wastewater dashboard shows the SARS-CoV-2 N-gene signal remains high, but the rapid increase observed since mid-December has plateaued at all sites. (Region of Waterloo)

The region's wastewater dashboard shows the SARS-CoV-2 N-gene signal remains high, but the rapid increase observed since mid-December has plateaued at all sites. (Region of Waterloo)

"Our collective efforts to blunt the wave are showing promise but we cannot let up on the brake pedal too quickly," she said.

Wang said the provinces' plan was "reasonable," noting its goal is to blunt the most severe impacts of Omicron while also mitigating harms related to keeping current restrictions in place.

"It's a delicate balance and it's a difficult decision that the province is making in terms of timing," she said.

Vickie Murray, head of the region’s vaccine task force, said 81.8 per cent of all eligible residents in Waterloo Region have received two doses of a COVID-19 vaccine.

An estimated 60 per cent have also received a third dose, including 82 per cent of people 70 and over.

Murray reported 51.5 per cent of children aged five to 11 in the region have received one dose.

The region trialed its first during-school clinic Wednesday and were "very pleased to get positive feedback," Murray said.

There are currently nine school-based clinics operating after school and on weekends.

Meanwhile "a small but steady supply" of the Johnson & Johnson vaccine is also now arriving in the region, Murray said. People interested in that vaccine can preregister with Region of Waterloo Public Health.

The next phase of vaccine roll out will include more community outreach, said Murray.

CALLS FOR COUNSELLING UP

Lisa Akey, director of Carizon and lead for the counselling collaborative made up of six non-profit counselling agencies in Waterloo Region was also on hand for Friday’s update.

Akey reported calls for counselling services in Waterloo Region have increased by 60 per cent during the pandemic, with a particular increase in the need for family counselling.

Alberta Premier Jason Kenney is urging the U.S. government to convince Michigan to abandon its legal campaign against the Line 5 pipeline.

Former Pentagon officials have briefed at least three Canadian members of Parliament about unidentified flying objects, according to a Manitoba MP and a Texas-based researcher.

Conservative Party leadership candidate Pierre Poilievre has a personal financial interest in cryptocurrencies that he has promoted during his campaign as a hedge against inflation.

International arrivals at Canadian airports are so backed up, people are being kept on planes for over an hour after they land because there isn't physically enough space to hold the lineups of travellers, says the Canadian Airports Council.

A day after Maple Leafs star Mitch Marner was robbed of his Range Rover at gunpoint outside an Etobicoke movie theatre, Toronto police said they have already seen more carjackings so far this year than they did in all of 2021.