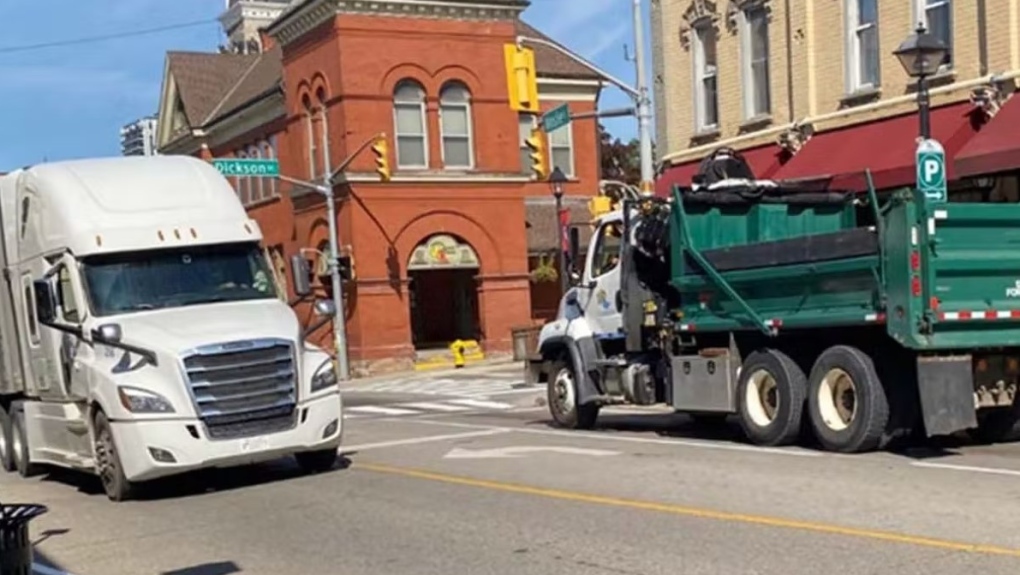 The Region of Waterloo is seeking public input on the potential of banning heavy trucks from the downton core in Cambridge.

Regional staff presented a Downtown Cambridge Truck Diversion Study in a virtual meeting on Thursday. The Region is exploring two options for truck traffic in Cambridge.

One option is to do nothing. The other option is to divert trucks from Ainslie St. and Water St. to McQueen Shaver Blvd., Franklin Blvd., Dundas St. and Concession St. Any trucks needing to deliver to businesses on Water and Ainslie would still be allowed.

According to the study, 1600 trucks use Water St. and Ainslie St. a day. Staff found if trucks were banned from those two streets, it would divert 62 per cent of the truck traffic from those roads. Which is about 1,000-1,150 trucks per day. The report found only 450 to 600 trucks would be left using Water and Ainslie per day.

The study found diverting trucks would increase travel time by 0 to 5 minutes for 6 per cent of the diverted trucks, while 11 per cent would see a 5 to 10 minute increase. It’s expected the remainder would not have their travel time changed.

Staff said if trucks are diverted, noise barriers will likely need to be built for McQueen Shaver and Franklin Boulevards. The report estimated the barriers would cost around $4 million.

The next step for staff is to collect feedback from the public. A noise study will also be completed. Regional staff are expected to make a recommendation to Regional council in the first quarter of 2023.