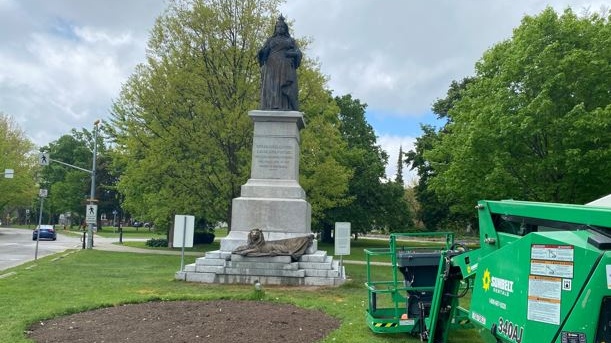 The Queen Victoria statue in downtown Kitchener is once again clean.

The monument was splashed with red paint earlier in the week. It was targeted sometime between Monday night, the Victoria Day holiday, and Wednesday.

This is the fourth time the controversial statue has been vandalized in the past year.

The city said that staff will be presenting a report to council in June "looking to continue a community dialogue about the Queen Victoria statue and the impact of colonial statues in public places."

Red paint was also thrown on the monument back on May 5, the National Day of Awareness for Missing and Murdered Indigenous Women and Girls.

"We continue to be concerned about the actions of some in terms of the vandalism on public property," said Kitchener Mayor Berry Vrbanovic. "As a city we're very committed towards public debate, discourse, disagreement, and civil protest around issues that matter to the community. But there's no time or place for damaging public property."

The city told CTV News that removing the paint on May 16 cost approximately $5,000.

The Waterloo Regional Police Service has not announced any arrests or charges in connection to any of the four incidents.

The campaign for Patrick Brown said it was consulting its legal team after the leadership election organizing committee of the federal Conservatives voted to disqualify him from the race late Tuesday.

A man charged Tuesday with seven counts of murder after firing off more than 70 rounds at an Independence Day parade in suburban Chicago legally bought five weapons, including the high-powered rifle used in the shooting, despite authorities being called to his home twice in 2019 for threats of violence and suicide, police said.