Reproductive rights were in focus in Guelph Monday night as a crowd gathered at city hall to demand more local access to abortion services and denounce developments in the United States.

It came just over a week after the U.S. Supreme Court overturned Roe v. Wade, ending the constitutional right to abortion in that country.

The rally, titled “Reproductive Freedom for All,” was hosted by the Guelph Resource Centre for Gender Empowerment and Diversity. Leaders from other local organizations also spoke at the event, including ARCH Guelph and the SHORE Centre, previously Planned Parenthood.

“A lot of people are saying: ‘I’m so happy we live here and not in the states because we have free and easy access.’ And is not true for a lot of communities,” said organizer Sarah Scanlon. “When you think about folks who are lower income [or] houseless, access to abortion is basically nil.

"Access to reproductive rights and abortion is not actually what people think it is in Canada." 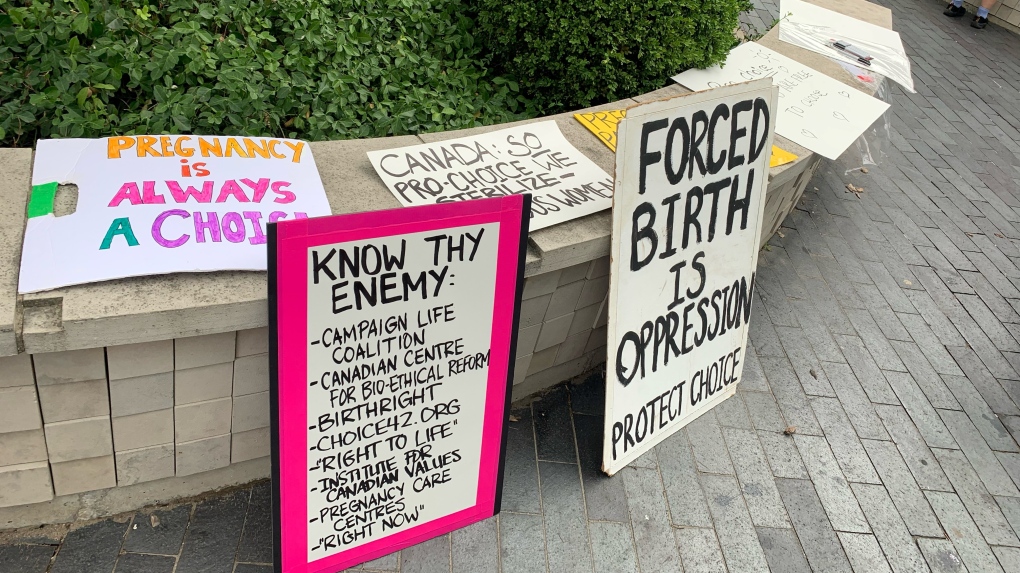 Scanlon said there is no clinic or way to access surgical abortion within Guelph.

The SHORE Centre has clinics in Kitchener-Waterloo and Guelph. The centre said it averages around 16 medical abortions each month in Guelph. Those are done using the so-called, “abortion pill.”

While abortions are medical procedures covered by OHIP, Scanlon says some clinics charge a fee for non-insured services and some medications can be costly.

"Plan B costs money," said Scanlon. "The thinks that we need to do to take care of ourselves and our bodies for those of us with uteruses and be able to have choice and atonomy over what happens with our bodies costs money."

According to the National Abortion Federation (NAF), there are 10 certified clinics in the province, which includes SHORE Centre operations in Kitchener-Waterloo and Guelph. The Abortion Rights Coalition of Canada lists 13 further clinics in Ontario.

Distance between clinics can be another barrier, according to organizers, as well as not all of them offering the same services, some only providing medical abortion, and fewer offering surgical abortion.

"If health risks are at top priority, I don't want to be shunned for saving my life," said rally attendee Devon Heart. "I ended up having an abortion from an abusive man."

The federal government has recently committed $45 million over three years meant to improve sexual and reproductive healthcare, which includes nearly $1.5 million to the NAF. 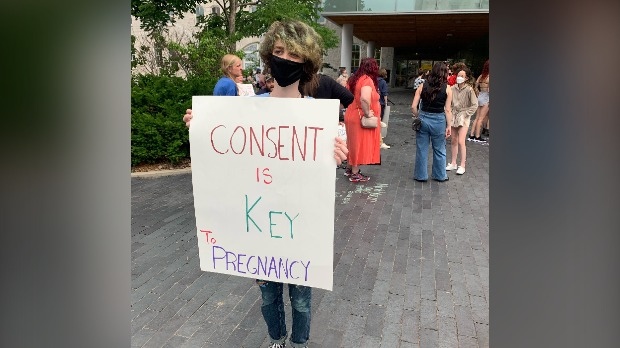 A participant at the rally holds a sign. (CTV Kitchener)

Members of a Freedom Convoy-affiliated group remain at an Ottawa church one day after the owner of the historic property moved to evict them over unpaid rent.

Transport Minister Omar Alghabra told the House of Commons transport committee the COVID-19 pandemic and resulting labour shortages are to blame for the significant wait times at Canadian airports, and said the ArriveCAN app is here to stay.

A new report from the U.S. Centers for Disease Control and Prevention says routine cleaning and disinfection may have helped two monkeypox patients limit the amount of contamination in their home.

A 81-year-old Danish woman traveling from Africa to Canada was arrested at Warsaw airport on suspicion of illegal possession of heroin worth over US$515,000, officials in Poland said Friday.