With the eviction of a large encampment in downtown Kitchener slated for next week, supporters held a rally and march Wednesday calling on the Region of Waterloo to change course and let the people living at the site stay.

"No peace! No housing! No peace! No justice!" they shouted while walked down the street and holding signs protesting regional council's decision. "Shame! Shame!"

"Somebody has to stand up for the people who are being evicted from the encampment, there's no plan in place," one of the rally participants explained.

Organizers said if residents of the encampment at the corner of Victoria and Weber Streets aren’t allowed to continue living there, the region should find another location for a sanctioned camp without the threat of eviction. While they know housing won’t be available for everyone immediately, they believe a sanctioned camp is the best option.

"We want these unsheltered folks to have shelter," said rally organizer Kamil Ahmed. "We understand that that can't happen overnight. So, in the meantime, both things are happening in parallel, we've got to either toss the eviction out and let them stay there and access the supports that they've already been accessing or let them move somewhere else where they won't be evicted in the next few months." 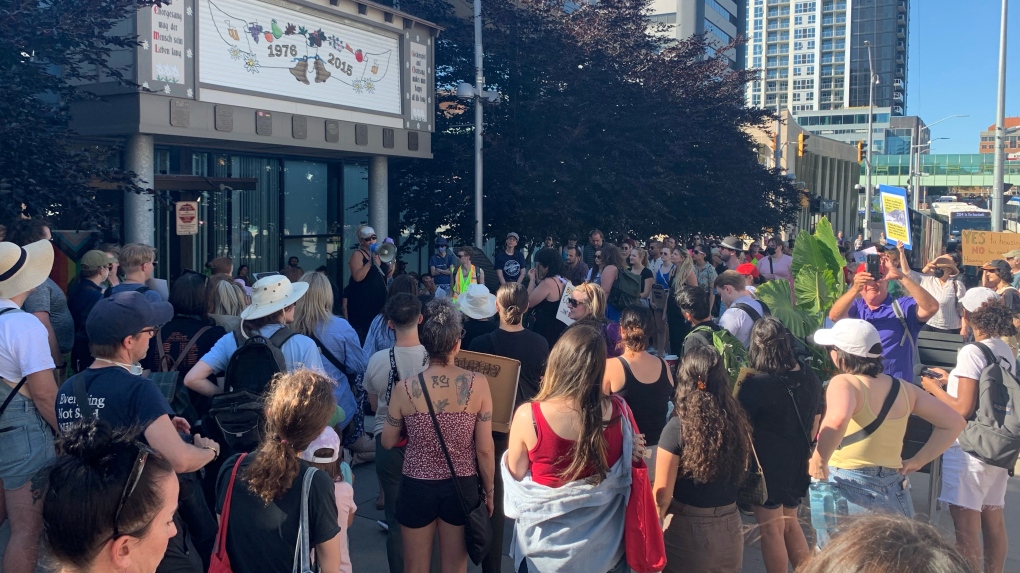 People gather for a rally in support of encampment resident in Kitchener on June 22, 2022. (Jeff Pickel/CTV News)

According to the region, over 60 tents and as many people were living at the encampment as of the beginning of June.

“[It’s] a human rights violation to evict folks from a place without offering alternative housing whether temporary or permanent,” Ahmed said.

The region originally allowed a small number of people to stay at the site with the understanding they would have to leave by the fall. As the camp grew, the region said safety deteriorated and the eviction date was moved up.

“We gave the residents living in the camp three weeks’ notice they had to vacate,” Region of Waterloo Chair Karen Redman said. “We have continued for months, and will until June 30, have outreach workers go in and talk to them about what supports are available and where they can go to find a safer place to live.” 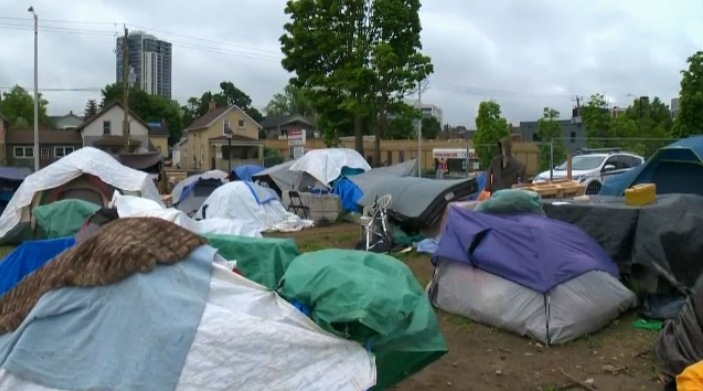 Tents at the Victoria Street encampment in downtown Kitchener are seen on Monday June 6, 2022. (Region of Waterloo)

Earlier this week the region announced plans to open a new 60 person overnight shelter in Kitchener. The region hopes the new space will remove some of the barriers that prevent residents from accessing shelters by letting couples stay together and allowing pets.

Advocates and allies for the encampment feel that's not enough for the crisis playing out in Kitchener's downtown core.

"We really need to confront the fact that this didn't have to happen," said one rally participant. "This utter depravity that has happened in our society, people going homeless, people on the street, police violently evicting people. It didn't have to happen like this. This was a policy decision."

“There’s a bit of optimism, some might call it delusion, even though there’s precedent that we might not be super successful," said Ahmed. “Even the response yesterday around the new shelter is a small glimpse into the fact the region is being forced to engage.”

Regional council discussed the planned eviction at a meeting on Wednesday.

They heard from one of the encampment's earliest residents who pleaded her case directly to councillors.

"You're telling us that shelters don't feel safe for you," asked Councillor Helen Jowett. "Am I understanding that to be the truth with some of what you've told us?"

"It takes a really strong person," replied Jen. "I maybe have some strength, but not in dealing with some of the shelter issues unfortunately."

Council did not make a decision about changing the eviction date at Wednesday's meeting but they did approve a motion to develop an interim housing plan for residents living in all regional encampments. They also set a budget for next Spring to meet the longer-term homelessness needs in the community.

Berry Vrbanovic, Kitchener's mayor and a regional councillor, spearheaded the motion and told council they needed to move quickly to get the process started.

"I think we've all been listening to delegations give some very compelling cases this evening and this issue is on the agenda," he said. "I think, quite frankly, these residents deserve to have council deal with it in some way, shape or form."

Council also agreed to request financial help from both the provincial and federal governments.