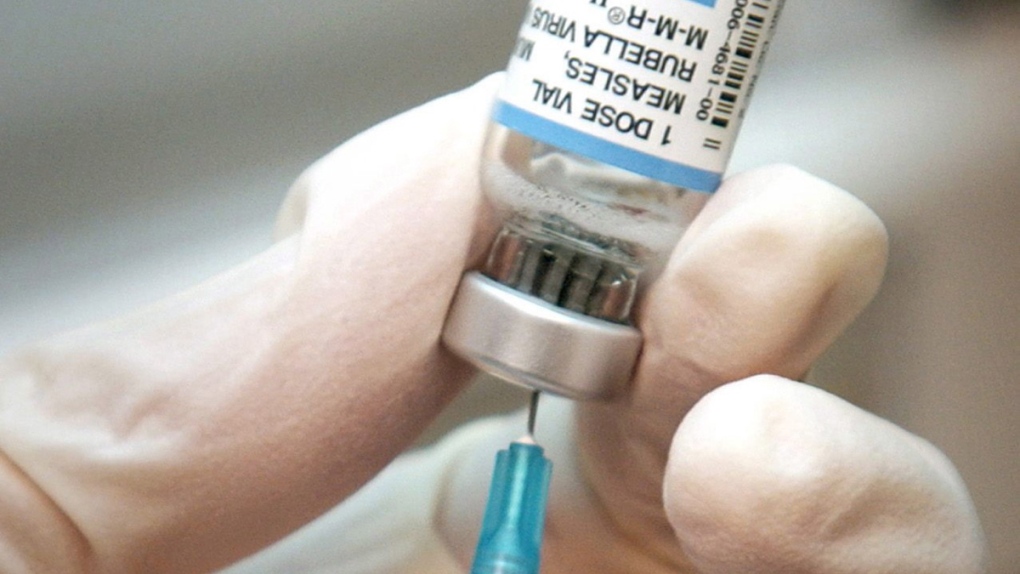 A nurse draws a dose of mumps, measles, and rubella vaccine in Wichita, Kan., April 24, 2006. (The Wichita Eagle / Mike Hutmacher)

TORONTO -- Public health officials and infectious disease experts are urging Canadians to check that their vaccinations are up to date as clusters of mumps are investigated in Ontario and Alberta, and measles cases are probed in Nova Scotia.

"Mumps and measles are very contagious illnesses...at the moment we have this particular issue with people who've only had one dose of vaccine. For this age group, it's a good time to check and make sure they've had two doses," said Dr. Allison McGeer, director of infection control at Toronto's Mount Sinai Hospital.

McGeer explained that when the mumps and measles vaccine was introduced, only one dose was administered but it later became apparent that two doses were needed for it to be effective over the long term.

McGeer said there was nothing overly worrisome about the recent mumps and measles cases but noted that they served as a reminder of the importance of immunization efforts.

"The fact that you can still get clusters of cases is a marker for just how important having those vaccination programs is. If they didn't happen then everybody got sick."

In Toronto, public health officials said Friday that there were 17 confirmed cases of mumps in the city, all involving people between 18 and 35 years of age who had frequented west-end bars.

A Toronto Public Health spokeswoman said 60 per cent of those cases were not immunized or under-immunized. Lenore Bromley noted, however, that the risk to the general public was low.

In Alberta, officials said there were four confirmed cases of mumps among students at the University of Alberta in Edmonton, which typically sees zero to two cases each year. And a hockey team based in Medicine Hat, Alta. had seven players and a coach with mumps, Alberta Health Services said.

The mumps virus is found in saliva and respiratory droplets, and is spread from person to person through coughing, sneezing, and coming into contact with a person's saliva by sharing drinks or utensils, or by kissing.

Dr. Sarah Wilson, a medical epidemiologist with Public Health Ontario, said individuals in the age range currently more susceptible to mumps may also be more at risk because of their behaviour traits.

That group of young adults is more likely to engage in behaviours and activities in which mumps spreads easily, like playing on sports teams where water bottles might be shared, living in dormitories in close conditions and sharing drinks and food in bars, she said.

"These situations provide really rich opportunities for the mumps virus, if it's introduced, to spread easily in a population that might not be up to date with respect to mumps vaccine," said Wilson. "I think those are some of the potential explanation for why we're seeing more mumps these days, in particular in this age group."

Wilson explained that even those who get two doses of the vaccine can still sometimes end up with mumps -- as seen in 40 per cent of the Toronto cases -- as the vaccine is considered about 88 per cent effective at that point.

Complications from mumps can include encephalitis, meningitis, painful swelling of the testicles or the ovaries, pancreatitis and hearing loss. Pregnant women who become infected with mumps during the first three months of pregnancy are at risk of miscarriage.

In Nova Scotia, Dr. Trevor Arnason, medical officer of health for Halifax, Eastern Shore and West Hants areas, said there had been one case of mumps reported in January in the Halifax area and that the person had spent time in Toronto. Since then there have been two other cases, he said.

Arnason said in general, people with mumps symptoms have not been fully immunized, usually having had only one dose of the MMR vaccine.

He said it's the same situation with a measles outbreak in the province where there have been seven recently confirmed cases in the Halifax area.

Arnason said it was his sense from managing the measles outbreak was that it was not the result of "an active anti-vaccine issue."

He said without a centralized database on people's immunization history, the onus is on individuals to be aware of their own records and to take the necessary steps to protect themselves through various vaccination programs.

Measles symptoms can include fever, cough, runny nose, red eyes, sleepiness, irritability, small white spots on the inside of the mouth and throat, and a blotchy rash on the face that spreads down the body.

-- with files from Keith Doucette in Halifax