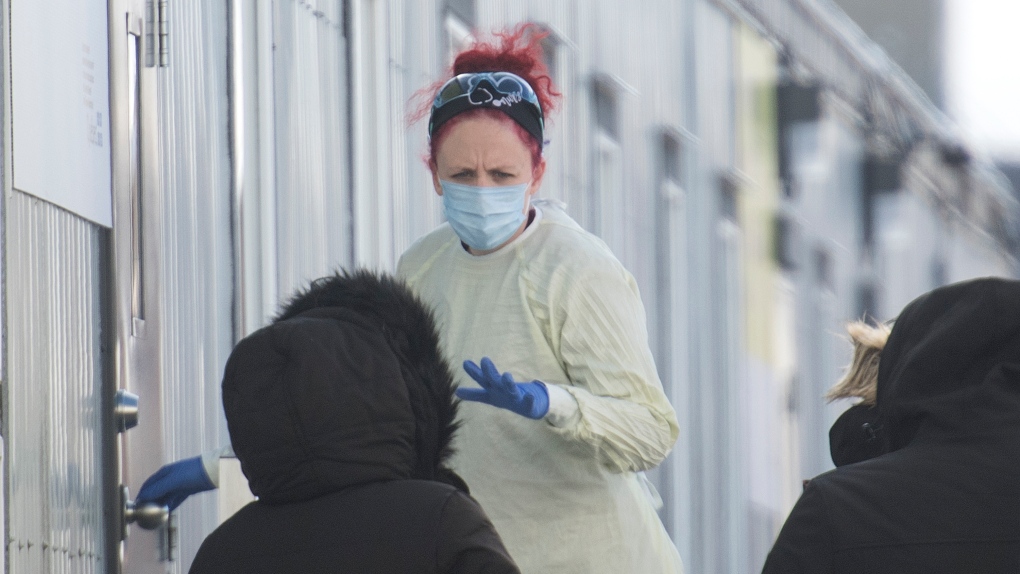 A health-care worker talks with people as they wait to be tested for COVID-19 at a clinic in Montreal, Sunday, Dec. 27, 2020, as the COVID-19 pandemic continues in Canada and around the world. THE CANADIAN PRESS/Graham Hughes

KITCHENER -- Region of Waterloo Public Health reported 166 new cases of COVID-19 on Thursday, pushing the total number of cases near 8,000.

According to the region's online COVID-19 dashboard, there have been 7,956 cases in the region since the pandemic began. That number includes 6,680 resolved cases—and increase of 130 from the day before—and 179 deaths.

There are currently 1,092 active cases in the region, which is a new record. Of the active cases, 35 people are in hospital, including 18 who are getting care in the ICU.

Public health officials also added two new outbreaks to the region's dashboard on Thursday: one at a paramedic service, which officials reported on Wednesday, and one at an automobile sales/service business. In each instance, three people have tested positive for COVID-19.

There are now 42 active outbreaks in the region.

Across Ontario there were more than 3,300 new infections reported on Thursday as the province's stay-at-home order began.

Thursday's update comes after two consecutive days where cases rose by fewer than 3,000.

Under the stay-at-home order, people are only allowed to leave the house for essential purposes, including exercise, groceries and picking up medication, to name a few.

READ MORE: Here's what is and isn't allowed during the stay-at-home order

On Thursday morning, Police Chief Bryan Larkin said that police would not randomly stop cars or people to ask why they're travelling. He did note, however, that if an officer stopped someone for another reason, like speeding, the officer would be able to inquire.

Still Larkin stressed that enforcement is his last resort, saying that the WRPS' goals remained to educate and encourage compliance without enforcing fines or jail time.

Canadians reporting more anxiety and depression than ever before, poll finds

1M vaccine doses to be delivered every week in next phase of COVID-19 immunizations: Fortin

With Ontario's stay-at-home order in effect, can police randomly stop you?