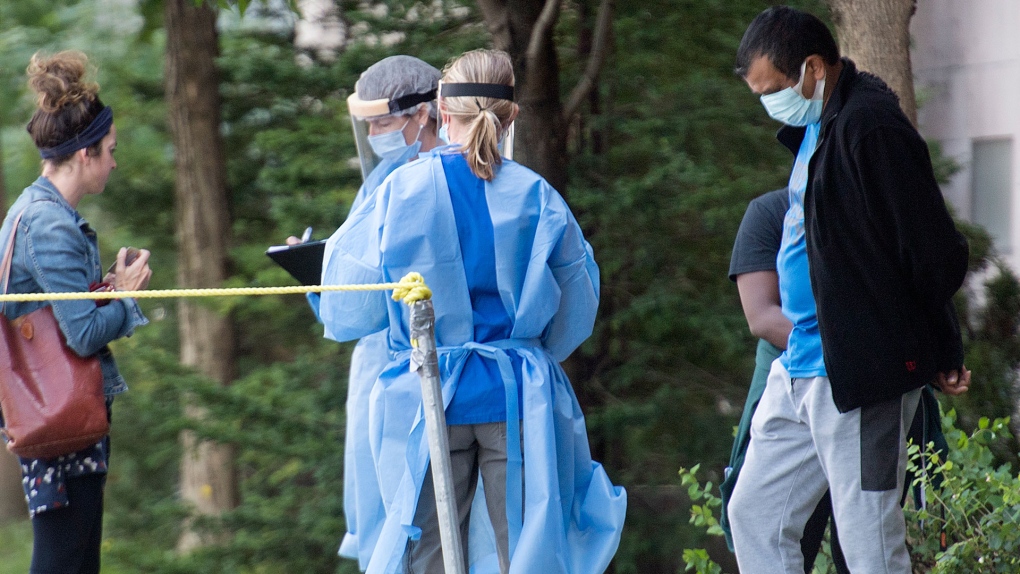 A health-care worker talks with people outside a COVID-19 testing clinic in Montreal, Monday, September 7, 2020, as the COVID-19 pandemic continues in Canada and around the world. THE CANADIAN PRESS/Graham Hughes

KITCHENER -- Region of Waterloo Public Health has reported another 13 cases of COVID-19 in the region, bringing the total number of cases up to 2,034.

The total includes 1,821 resolved cases, which is an increase of 11 from the day before, and 120 deaths. That leaves 93 active cases in the region, eight of which are in hospital.

The region's online COVID-19 dashboard showed that the ongoing outbreak at Conestoga Lodge retirement home was declared over. That outbreak was first declared on Oct. 15 after a staff member tested positive for the disease.

The Region of Waterloo also announced on Thursday morning that the outbreak at Sunnyside Home long-term care was over, too, though the region's dashboard didn't reflect that change by the afternoon.

Taking those facilities into account, there are now nine active outbreaks remaining in the region:

Officials around the province reported another 841 cases of COVID-19 on Thursday, a notable increase from the 790 cases reported the day before. Nine more deaths were also reported.

As has been the case in recent weeks, Toronto saw the highest number of new cases with 335. Peel Region also saw 162 new cases, while York Region saw 106 and Ottawa reported 72.

There are more than 34,700 COVID-19 tests that are still under investigation.

EU shuts door to travel from Canada amid surge of infections