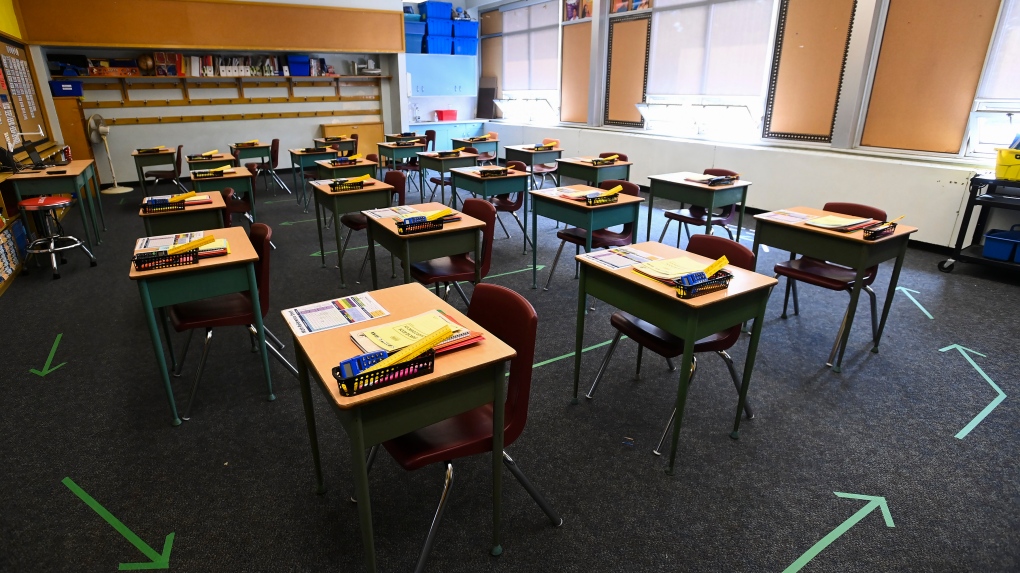 A grade six class room is shown at Hunter's Glen Junior Public School which is part of the Toronto District School Board (TDSB) during the COVID-19 pandemic in Scarborough, Ont., on Monday, September 14, 2020. THE CANADIAN PRESS/Nathan Denette

KITCHENER -- Region of Waterloo Public Health has declared a COVID-19 outbreak in a cohort at Sunnyside Public School after two cases were linked.

According to a news release, the investigation found a case that was in the same cohort as a case reported last week. Officials also identified a staff member and directed them to self-isolate.

Officials are now treating every COVID-19 case as a potential variant of concern before a variant is identified.

In a little more than a week, there have been six cases identified at the school.

You can track every case in publicly funded schools using our online case tracker.

Public health officials are working to identify high-risk contacts and are conducting enhanced case and contact management in an effort to slow the spread.

This is the second active school outbreak in the region. The other is at St. John Catholic Elementary School in Kitchener, where officials have identified 12 cases so far.

U.S. issues advice to those fully vaccinated, but no shift in Canada yet

COVID-19 vaccines and pre-existing medical conditions: Should certain people not get a shot?

Canada set to receive more than 910,000 doses of COVID-19 vaccines this week

Fully-vaccinated people can gather without masks in U.S., CDC says

U.S. is close to a possible COVID-19 surge, expert warns

Where were you the day the world changed? We want to hear from you