Province will stick to plan to cap teachers' wage increases at one per cent: finance minister 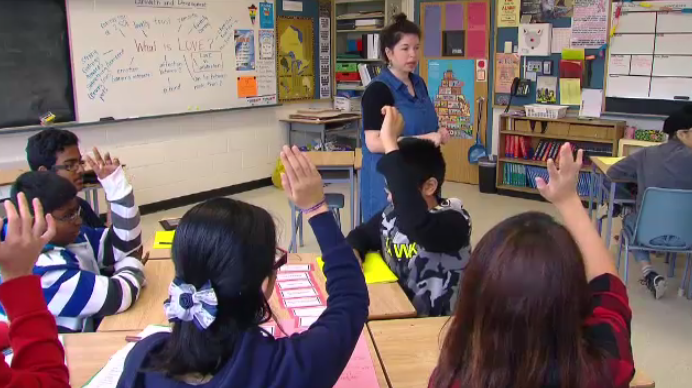 Rod Phillips made the comments days after the Progressive Conservatives inked a tentative agreement with the union representing 55,000 education workers that included a one per cent wage increase.

The minister said he hopes other labour groups look to the example set by the Canadian Union of Public Employees, adding that the government has been clear about the cap since last spring.

"That's 55,000 workers in the education sector that understand that there are limits to what the people of Ontario can pay for the quality education that we know our students deserve," he said. "Hopefully that message has been heard by the various other unions involved."

In June, Treasury Board President Peter Bethlenfalvy introduced legislation that would establish a one per cent wage-increase cap for public sector workers. The bill, which has yet to pass, sparked anger from major unions who warned it could derail ongoing contract negotiations, trigger protests and lead to a court challenge.

Earlier this week, Education Minister Stephen Lecce lauded the CUPE deal, and the union's acceptance of the cap, as a win for the government.

CUPE also claimed a victory in the negotiations, saying the tentative agreement restores millions in funding and brings back as many as 1,500 jobs cut by the Tories.

The president of the Ontario Secondary School Teachers' Federation said Wednesday that union is not interested in accepting the government's wage increase cap.

Harvey Bischof said the union has proposed a "cost-of-living adjustment" based on a formula linked to the Consumer Price Index. The current rate of that increase would come in around two per cent but that could change if the economy sputters, he said.

"Minister Phillips can focus on what inflation is right now but bear in mind, should inflation fall to a half a per cent a year ... because we enter a period of recession that would apply to us too," he said. "Someone with a fixed number could end up above inflation."

Bischof said talks between the government and his union are still in the early stages and are scheduled to continue throughout the month.

The president of the Elementary Teachers' Federation of Ontario called Phillips's comments "very disappointing", adding that they do nothing to advance negotiations.

"Public remarks like this by a representative of the Ford Conservative government are inappropriate and it is, essentially, bargaining in the media," Sam Hammond said in a statement. "That's something the government has made a commitment it will not do, a commitment that Mr. Phillips has taken upon himself to break."

Both high school and elementary teachers' contracts expired at the end of August.

Earlier this year, the government ordered school boards to start increasing class sizes, moving to an average for high school from 22 to 28 students over four years. Class sizes for grades 4 to 8 will increase by one student per classroom, from 23 to 24. Ontario's Financial Accountability Officer has said the move would see 10,000 fewer teachers in the public school system over the next five years.

NDP education critic Marit Stiles said teachers are concerned about the cuts the Ford government has made to the education system and that will impact contract talks.

"If government wants to start out on the right foot, they'll reverse their decisions around class sizes and cuts before they get too far down this road," she said.

Green party Leader Mike Schreiner said the Ford government needs to invest in schools and not threaten teachers with cuts. The government seems to be more focused in talks with brewers to expand beer and wine sales to corner stores than education bargaining, he added.

"I urge the premier to put as much effort into fixing our schools as he does in renegotiating the Beer Store contract," he said.

This report by The Canadian Press was first published Oct. 9, 2019.