BADEN -- A group of people calling for the removal of Baden's Sir John A. Macdonald statue clashed with another group working to clean red paint off the controversial figure on Wednesday night.

Paint has been dumped on the statue twice this week.

On Wednesday afternoon, Baden resident Brad Greulich cleaned up most of the statue, but left paint on the base to reflect Macdonald's role in establishing the residential school system. 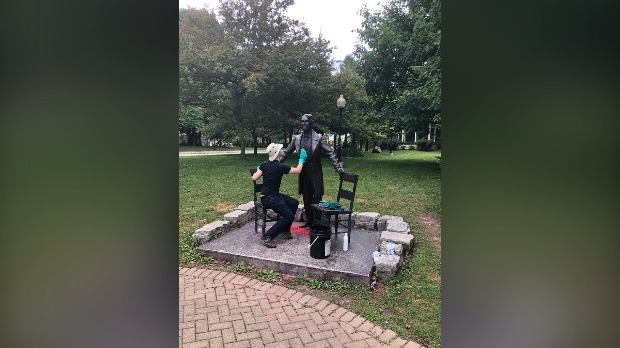 Four people, who identified themselves as part of the Urban Infidels Street Patrol, came to remove the rest of the red paint from Macdonald's statue a few hours later.

Once the paint was gone, they confronted a group who came to the site to make a statement. 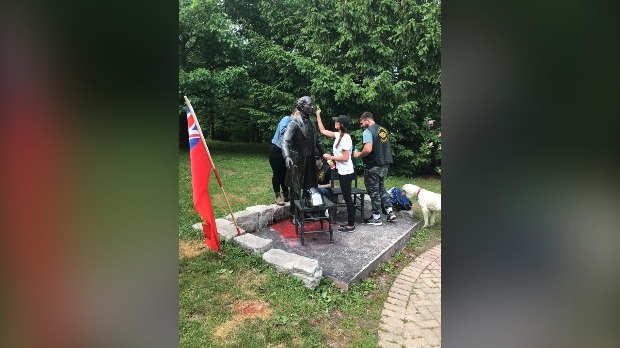 Cheyanne Thorpe, who lives in the area, said she believes it's important for the red paint to stay for now.

On Tuesday, Wilmot Township officials decided to remove a tarp covering the vandalized statue and leave the paint as a symbol of listening and learning as the debate over the statue's future continues.

Some in the area would like to see the statue removed.

"When it was moved here, to my dismay, we didn't take action at the time," Jain Redfern said. "But we thought this was a good time to pick it up in light it was vandalized and sparked conversation online."

Macdonald's likeness is part of the Prime Ministers Path project in Baden. Wilmot Township Coun. Angie Hallman has brought forward a motion to council to put the project on hold.

But, some residents still support the project.

"It's not a shrine to the man, it's simply an education tool," Baden resident Laura Herner said. "It's a bronze statue."

The group demonstrating on Wednesday night said they'll return every Saturday until the statue is removed.