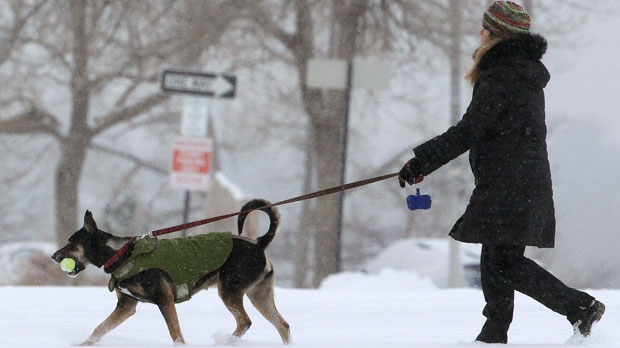 A woman walks her dog as a blizzard dropped snow over Boulder, Colo., on Dec. 19, 2012. (AP Photo/Brennan Linsley)

Dogs and cats can be somewhat insulated by their warm-feeling coats but in the face of frigid temperatures, pet owners need to take extra measures in protecting Fluffy and Fido.

Assessing how long to let pets stay outdoors should be based on numerous factors including the animal's breed, coat type, general health, and age, according to an online article originally published in 2010 by the Canadian Veterinary Medical Association.

Determining whether the pet has been acclimated to colder weather and its desire to spent time outdoors should also be considered, the association wrote. For example, "smaller, short-coated, ill or geriatric dogs" have less tolerance for cold, and consequently, are limited by the time they may be able to spend outside, the CVMA noted.

"If you like to let your cat out in the backyard, let's say, to roam around on your own property for a short period of time, you should be supervising your animal in a cold weather environment," said Ontario SPCA inspector Paul Harrison.

"Cats are good in the snow, they're pretty hearty; but you may have an older cat whose systems may not be as strong as a younger cat."

If an animal is left outside unsupervised and snow, sleet or rain develops, it won't be able to hold its body temperature without proper shelter to take refuge, he noted.

If a dog is kept outside in the backyard, Harrison said owners should ensure the shelter is raised above the ground and is well-insulated with shingles or a proper roof to repel rain. The door should be facing away from prevailing wind.

It's also key to check that an animal's water supply hasn't been frozen and is housed in a non-spillable dish, with the option to consider purchasing a heated water bowl, he added.

Greenspan said her 2 1/2 year-old pooch, Georgia, is "very finicky" when salt gets into her front paws. Prior to taking her German shepherd-husky-collie mix outdoors, Greenspan tries to ensure her pet stays calm as she applies protective balm on Georgia's paws.

"You just want to always instill trust and comfort because it's uncomfortable for the dogs at first to have their paws handled in that way."

The Canadian Veterinary Medical Association suggests trimming excess hair from between a pet's toes, where it tends to trap salt. Ensure any residual salt is rinsed off or removed with a damp cloth and fully dried back at home. Coating the hair between the undersides of the toes with a thin layer of petroleum jelly can help to repel the ice, the association wrote.

Harrison said if a dog is visibly shivering and lifting up its paws, seemingly unwilling to stand on them, that could be an indication of discomfort.

"Most people know their animal so well," he said. "If they start acting differently than they normally would, it could be an indication that they're uncomfortable."

And both Greenspan and Harrison agree that leaving dogs locked up in vehicles is a definite -- and dangerous -- don't.

"Some people think that because it's colder out they can sustain themselves in a car. They can't," said Greenspan. "If it's cold for you, it's cold for them, and dogs unfortunately can fall ill due to extreme cold weather."