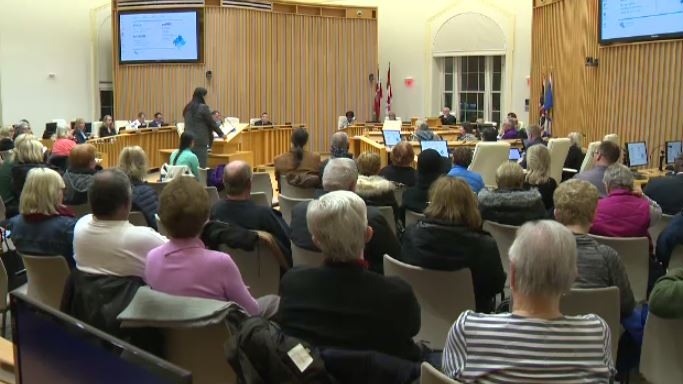 KITCHENER -- There was a big discussion Monday night over one of the smaller projects in the City of Cambridge’s 2020 draft budget.

Public delegations were heard at the council’s budget meeting over a variety of budget issues, including many showing support for a proposed rainbow crosswalk.

"It's a symbol much like a cenotaph would be for veterans in other communities. It's not just a matter of putting a pride flag up one a year at pride month in June, this is a symbol this community looks for in order to feel safe and include in that community," said Mayor Kathryn McGarry.

The idea was first approved in the Diversity Committee’s 2018 report, but now has to gain funding from the budget committee.

"The suicide rates in this region are devastating. The amount of people who feel like they belong is miniscule.  We are looking at populations that are decreasing and decreasing because their isolation or alienation is leading them to end their lives, especially among youth.  A symbol like this is literally a lifesaver; a lifesaver for so many youth across the region," said delegate and advocate Samantha Estlesta.

The rainbow crosswalk would cost the city about $15,000, which McGarry says has to do with the special heat application the paint needs to ensure it does not become slippery.

Council did receive some emails specifically for tonight’s agenda, from those against the project,with opponents mainly citing the cost.

McGarry notes Kitchener and Waterloo have installed similar crosswalks for around the same cost.

Council did not discuss a proposed spot for the crosswalk at Monday’s meeting.

As it stands now, council previously revealed the city is facing a year-end deficit of $95,500 due to several factors including snow removal from an early blast of winter, staffing costs, and licensing for computer programs.

"Mayor, council, and staff all really work hard to prepare a budget to deliver high quality service with the lowest tax that we possibly can," said McGarry.

The city’s overall draft budget would being a property tax increase of four per cent, about $55 more for the average household if council doesn’t make any more cuts.

The next public meeting is Thursday night.

City council is hoping to hold its final vote on the entire budget by December 12.