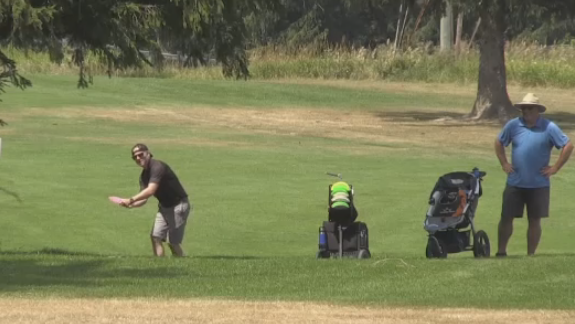 The three-day event wraps up Sunday and attracted over 200 players from across Canada and the United States.

“We have 210 players out here this weekend. We’ve got people from Nova Scotia, Manitoba, we have quite a few players that came out of the states,” said Darrell Bankes, tournament director of the Foxwood open. “There’s a big contingency in here from Quebec this year.”

Jake Voskamp competed last year in the tournament, and this year hopes to finish strong.

“My first opportunity to qualify was this tournament last year, and I didn’t have my greatest event, so I’m hoping to finish strong and see what happens,” said Voskamp.

“This is a huge opportunity for them. They are going to play the biggest tournament in disk golf down in the U.S.,” said Bankes.

At the end of the second day, Hamilton’s Chris Ozolins was leading the pack at 10 under par and Waterloo’s Joe Vander Veen was on his heels sitting at six under par and Voskamp at five under par.

In the woman’s tournament, Colleen McInnes from Burlington was in the top spot sitting even at par. Sandi Hendel from St. Thomas was in second at four above par followed by London’s Carleen Green in third at six above par.

HOW THE SPORT HAS GROWN

Players say the competition is getting tougher every year as the popularity of the sport grows in Canada and the United States.

Other players said their divisions have seen growth more than double in the last few years.

“We had four people out here a couple years ago, and now there’s ten women in the fpo division,” said Chantel Budinsky, a player in the women’s pro division.

In addition to an entry into one of the world’s biggest disk golf tournaments, cash is also up for grabs as players compete to take home a purse of $11,000.

“The talent is blowing up. What we’re finding is we're getting a ton of athletes coming out to play,” said Bankes.

Whoever gets first place will take home $1,300 at the end of the final round on Sunday.