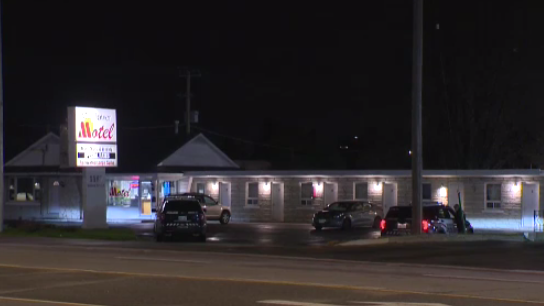 Officers could be seen stationed in front of the Victoria Motel, as well as the neighbouring Mayflower Motel on Tuesday night.

KITCHENER -- Police found a man with multiple stab wounds after they were called to investigate reports of a stabbing in Kitchener Tuesday night.

Waterloo Regional Police Service tweeted at 11:00 p.m. that were would be a heavy police presence near 1175 Victoria Street North throughout the evening.

Officers could be seen stationed in front of the Victoria Motel, as well as the neighbouring Mayflower Motel.

Police said after initial reports of a stabbing, they located a man with multiple stab wounds. The man has since been treated for his injuries and released from hospital.

They say that the incident is believed to be targeted and there is no concern for public safety.

Officers continue to search for a suspect in the stabbing, although no description was provided by police.

Heavy police presence in the area of 1175 Victoria Street North in Kitchener after reports of a stabbing.

Mae has been located with multiple stab wounds.

More information will be released when available. pic.twitter.com/rTqWVZwR7I