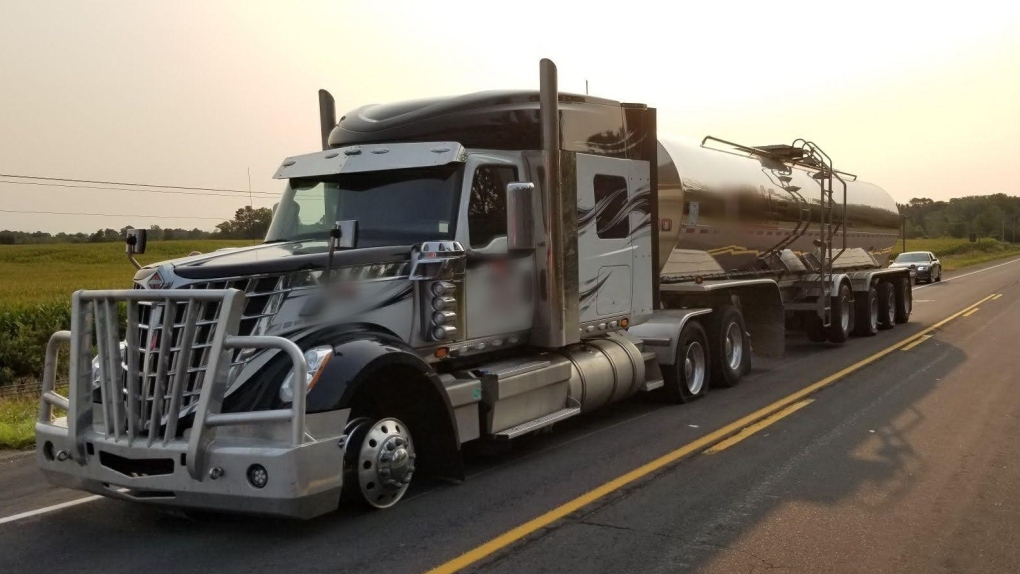 Police say they tried to stop this truck after it was seen driving erratically, but ultimately a police officer had to jump onto the moving vehicle to get into the cab. (Source: Huron OPP)

KITCHENER -- A suspected medical episode, a commercial truck in the wrong lane and an approaching school zone: these were the factors that led to a police officer jumping onto the side of a moving commercial truck to get it stopped.

Witnesses reported that the commercial truck was driving erratically, including driving slowly in the oncoming lane.

Police officers found the vehicle near Front Road and tried to stop it.

"Despite the numerous police vehicles following behind with lights and sirens activated the driver failed to stop," a news release explained in part.

"Spike belts were deployed and several tires were deflated however the vehicle continued trucking along at a slow speed."

To make matters worse, the truck was approaching a number of school zones in Clinton. As a result, a senior member of the Huron OPP jumped onto the side of the truck and was able to get into the truck's cab.

With the help of another officer, the officer was able to stop the truck and get the driver out of the vehicle.

Police suspected that the driver was experiencing a medical event, but a news release issued on Tuesday morning explained that the circumstances were still under investigation.

Some deflated tires & destroyed spike belts but otherwise this potentially dangerous incident came to a safe ending this morning. The driver failed to stop at a low speed before a #HuronOPP officer climbed onto the rig & managed to get the vehicle stopped east of Clinton. ^js pic.twitter.com/ZrPEiaEHLy