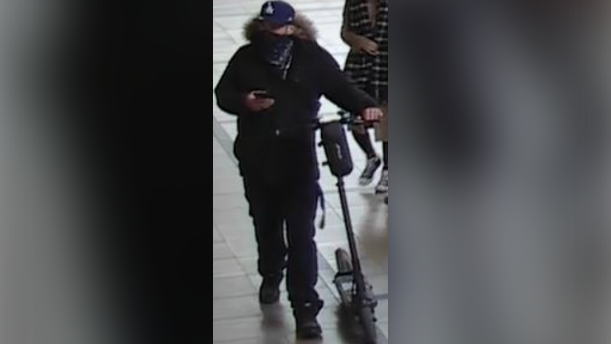 Waterloo regional police issued photos of a man they say is connected to an armed robbery at Fairview Park Mall in Kitchener.

The incident happened on Friday at approximately 2:45 p.m. after two employees confronted a man for allegedly shoplifting.

According to a news release, the man pulled out a knife and left the mall on a stand up electric scooter.

Police said “the suspect was described as a white male, approximately 6’ tall, 20 to 30 years old, and had facial hair.”

The pictures indicate he was wearing a black jacket with a fur lined hood, blue jeans, black shoes, and a blue Los Angeles Dodgers hat.

While the electric scooter appears to have a thick running board with white letters.

Anyone who recognizes the person in the photos is being asked to contact the Waterloo Regional Police Service.