Police looking for suspects in May home invasion 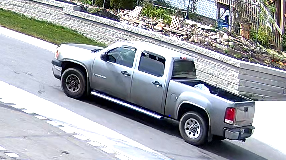 Police have released a photo of a vehicle in relation to a home invasion (Supplied: WRPS)

KITCHENER -- Waterloo regional police are searching for a pair of suspects following a home invasion in Kitchener last month.

The incident happened on May 19 in the area of Mill Street. Police said two men forced their way into a home around 4:20 p.m. and threatened the people who were inside. They stole personal property which was located outside the house. The victims sustained minor injuries.

Police said they're looking for a light-coloured GMC pick-up truck that was seen fleeing the scene.

The first suspect is described as a man of Southeast Asian descent, wearing all black clothing with a small build and dark hair.

The second suspect is a white man around 6'2" tall with a muscular build and short dark hair. He was wearing a red bandana over his face.

Investigators said they believe this was a targeted incident.