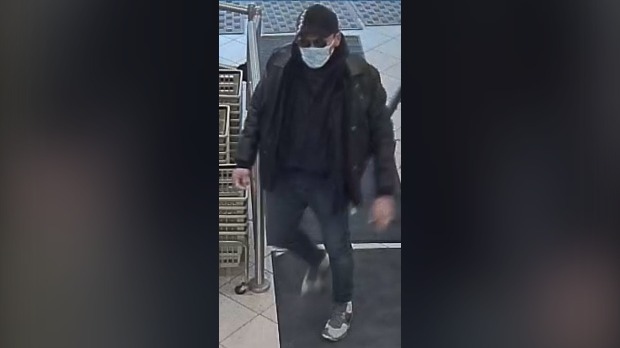 Police have released this image of a suspect in a robbery (Supplied: WRPS)

Police are looking for a suspect in a robbery at a business in Waterloo last month.

Officers were called to a robbery in the area of King Street South and William Street around 2:30 p.m. on Dec. 30.

According to a news release, the suspect hid merchandise and tried to leave the store, but was stopped by store security. The suspect allegedly assaulted the security guard and fled with the merchandise.

The security guard suffered minor injuries in the incident.

Police said the suspect is described as a white man between 40 and 50 years old, around 5'9" tall, with a thin build and short hair. He was last seen wearing a black jacket with a navy blue jacket underneath, white and grey shoes, a black and red ball cap, sunglasses and a blue medical mask.