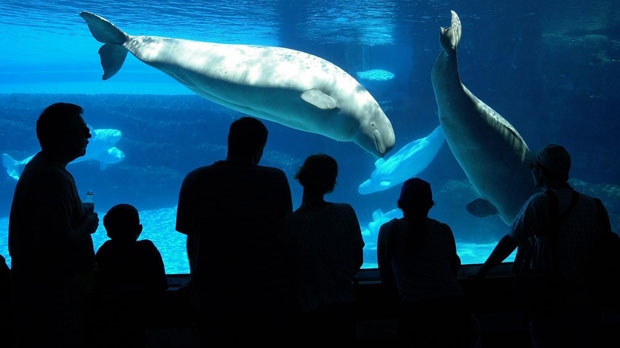 Tourists line up at a viewing area to see two Marineland attractions, a Killer Whale calf swimnming with its mother and a small pod of Beluga Whales in Niagara Falls, Ont. on Wednesday, July 18, 2001. (The Canadian Press/Scott Dunlop)

Ontario's animal welfare agency says a lawsuit by Marineland alleging the organization targeted the theme park to boost fundraising and appease animal activists is an abuse of process and should be dismissed.

In its statement of defence, the Ontario Society for the Prevention of Cruelty to Animals, which had laid animal cruelty charges against the Niagara Falls, Ont., amusement park, denies Marineland's claims of malicious prosecution.

The OSPCA says any damages or losses suffered by Marineland due to the criminal charges "are entirely the result of its own misconduct and that (Marineland) is the author of its own misfortune."

In October, Marineland filed the lawsuit against the OSPCA alleging the agency launched a criminal investigation with the intention of harming the company's reputation. It also claimed the probe was part of a broader push to ban commercial zoos and aquariums.

The OSPCA investigation led to 11 animal cruelty charges against Marineland that were withdrawn in court last summer.

Marineland says in its statement of claim that the charges had "a direct and seriously negative impact" on its business and operations, and is seeking $21 million in damages on grounds of malicious prosecution, negligent investigation, injurious falsehood, and abuse of power and process.

"The OSPCA's purpose in initiating the prosecution was not the enforcement of the law," says the statement of claim filed in late October. "It was motivated by a series of improper objectives, including a desire to accomplish its own policy agenda, to mollify the animal activist community, to please its donors, and to effectively destroy Marineland."

The OSPCA denies each of those allegations in its statement of defence filed in late November.

The agency has said it launched the investigation in November 2016 after receiving a complaint from the California-based animal rights group, Last Chance for Animals, that contained allegations of animal abuse along with photographs and videos from a former Marineland employee.

The Canadian Press obtained a copy of the complaint and some of the stories it reported are cited in the lawsuit. Marineland said at the time that the complaint was part of a smear campaign by a former employee who had been fired for poor performance and inappropriate behaviour. It also argued the images and videos may be doctored.

The former employee, who requested anonymity for fear of being sued, told The Canadian Press at the time that he quit on good terms and was not an animal activist and didn't want the park to close.

Marineland was initially charged with five counts of animal cruelty in late 2016 in relation to the treatment of peacocks, guinea hens and black bears. In January 2017, the OSPCA laid six more animal cruelty charges against the park relating to elk, red deer and fallow deer.

The charges were withdrawn in August after prosecutors found they had no chance of conviction on most counts.

The Crown said at the time it could have proceeded on three of the charges -- which related to failing to comply with standards of care for a peacock, guinea hens and a red deer -- but did not believe it was in the public interest to do so, citing potential court costs and a weak case.

Marineland could not immediately be reached for comment on Friday.

Since it opened in 1963, Marineland has grown into a large amusement park with rides and about 4,000 animals including one killer whale, dozens of beluga whales, dolphins, walruses, seals, sea lions and other animals such as deer, bears, birds and fish.