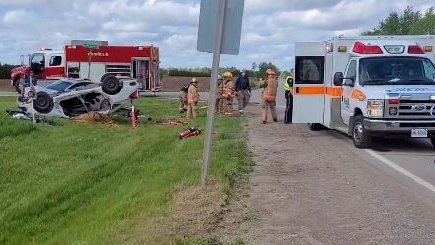 One person has been taken to hospital after a two-vehicle collision south of Brantford.

They said the vehicles were travelling in opposite directions when they collided at the intersection.

One driver was taken to a local hospital with serious but non-life threatening injuries.

An Ornge air ambulance also responded to the scene of the crash.

It's unclear if they transported the driver to hospital.

The other driver was not hurt.

Patrick Brown has been disqualified from the federal Conservative leadership race, after ballots have already begun to be mailed out, and his campaign is fighting back against what it calls anonymous allegations.

Emergency room delays to continue for 'quite some time,' doctor warns

An emergency room physician is urging governments to address the country’s shortfall of health-care workers in light of the recent temporary shutdowns of emergency departments and the staffing downsizing at others.

A high school friend of B.C. teen Amanda Todd has testified he took action when he saw what he described as a 'pornographic' picture of her on Facebook in November 2011.