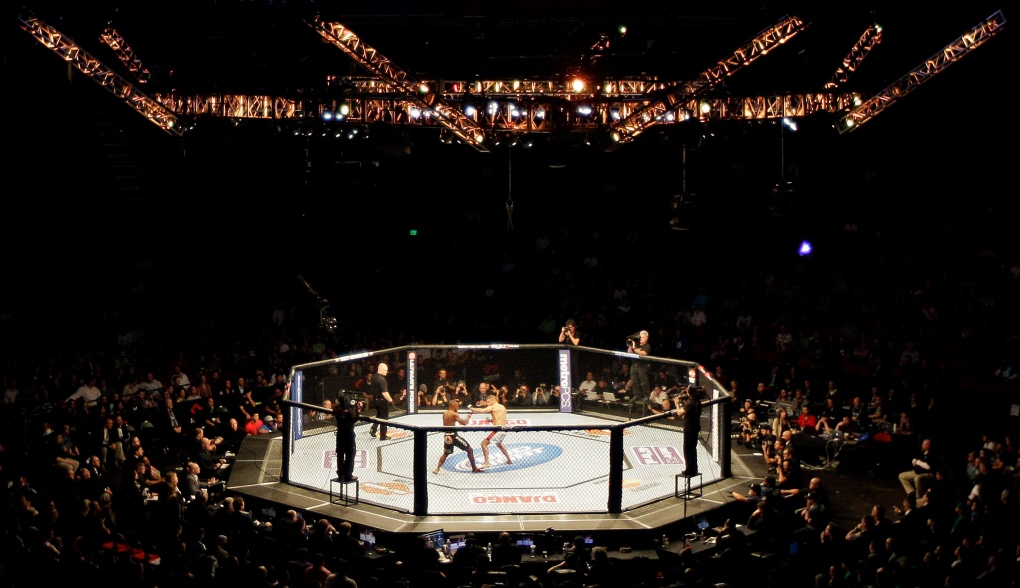 In this Dec. 8, 2012, file photo, competitors battle during a UFC on Fox mixed martial arts event at the Key Arena in Seattle. (AP Photo/Jeff Chiu, File)

Combat sport laws in Ontario are set to be overhauled in what the government says is an effort to draw more high profile events to the province and bolster athlete safety.

Michael Tibollo, minister of tourism, culture and sport, said the government plans to replace legislation that governs sports like boxing, mixed martial arts and kickboxing to allow for the development of regulations that are in line with evolving international standards.

The current legislation is outdated, has deterred major combat sport promoters from holding more events in Ontario, and means the international sports are fought under different rules in the province, Tibollo said.

"(The change) will allow us to bring to Ontario the things that a lot of people are interested in and either have to go to Vegas or to another jurisdiction to see," he said. "I think we can capture some of that money we're losing and keep it in the province."

Tibollo said current combat sports rules are enshrined in legislation, making it hard to update them to reflect changes aimed at protecting participants based on the best available medical science.

The government has acknowledged that its rules around things like hand-wrappings standards in boxing, the timing of fighter weigh-ins for mixed martial arts competitions, and even the required pant lengths for kickboxers need to be changed to reflect modern competitive standards.

Currently, the government would have to open the law and follow a lengthy legislative process to make even minor changes to those individual rules.

The new law, if passed, would appoint a combat sport commissioner and an advisory council to offer recommendations to the minister on the most up-to-date rules for each sport. The government could then update rules through regulatory changes -- a much less time-consuming legal process.

The planned change is part of the government's spring budget, which was tabled last month. Once the budget bill passes, the province can hold consultations on its new proposed combat sport law, and develop sport-specific regulations in early 2020.

World Boxing Council President Mauricio Sulaiman said his organization has raised concerns with the Ontario government over what it viewed as rules that put fighter safety at risk.

"We did extensive work for several years to point out the dangers of a few local rules which were not acceptable by the WBC and the boxing community in general," he said.

The WBC said it would welcome Ontario's adoption of its practices to enhance safety.

Noble Chummar, a lawyer who represented U.S. mixed marital arts promotion company Ultimate Fighting Championship when mixed martial arts was legalized in Ontario in 2011, said the government's planned move will help level the playing field for all combat sports in the province.

"The uniformity of rules globally is what allows a sport to flourish," he said. "The changes are necessary so that UFC can deliver its sport the same way that it does all around the world, as it is for any other professional sports organization."

Former Liberal premier Dalton McGuinty's government faced a very different landscape when it legalized mixed marital arts, Chummar said. The sport was still relatively new, the subject of many misconceptions, and was also being fought in underground events, he said.

"It was, frankly, just dangerous for the participants of the sport," Chummar said. "People were mismatched. There weren't the regulatory safeguards in place to ensure that there were proper medical attention, weigh-ins, impartial refereeing. All of that type of thing that comes with a robust and strong regulatory regime."

Things have changed since then, Chummar said, adding that he was hopeful the current Progressive Conservative government would engage with various sports organizations, athletes and other stakeholders in developing its modernized approach.

The government's plans will also impact amateur combat sport competitions, in a bid to lift restrictions on the types of events that can be held and ease the burden of liability placed on the shoulders of organizers.

Tibollo, who himself holds a fifth degree black belt in taekwondo, said the change would give some organizations ways to alter rules to make competition safer for children and encourage further participation.

Under the current regime, some amateur events are taking place illegally because obtaining a proper permit to hold a combat sport event is overly complex and costly, he said.