TORONTO -- Premier Doug Ford's government admits there is a problem with new licence plates it started issuing to drivers just weeks ago, and says it's working with the manufacturer to address complaints that the models are hard to see in low light.

Consumer Services Minister Lisa Thompson said Wednesday the government has asked 3M Canada to investigate numerous reports that started to surface over the weekend saying the plates are nearly unreadable in the dark.

The premier's office confirmed that because of social media reports from law enforcement officers and concerned citizens, it now believes there is a problem with the new plates.

Thompson had previously defended the plates, saying they had passed rigorous testing, but now acknowledges the government is paying attention to the reports.

"We are listening and we are continuing to work with the manufacturer, our stakeholders and the public to get this right," she said during debate at the legislature.

Thompson, who refused to take questions from reporters Wednesday, said during question period that 3M has oversight of quality control for the new plates and the government is having discussions with the firm.

The company did not immediately respond to a request for comment.

The problem was first raised on social media over the weekend, when an off-duty police officer from Kingston, Ont., posted a picture of a "virtually unreadable" plate in a well-lit parking lot at night. 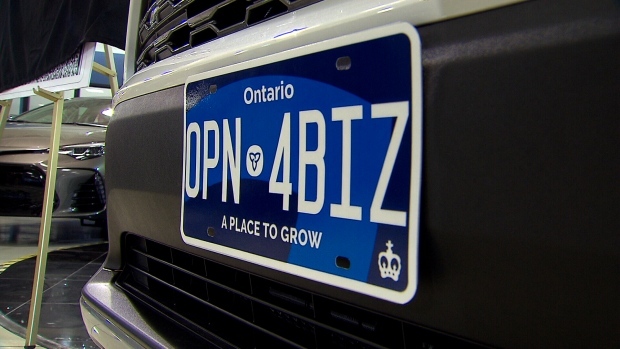 The Progressive Conservatives revealed the new plates in the 2019 budget, saying the government spent $500,000 on a consultation on branding, but had a new contract for licence plate production that saved $4 million.

Bill Walker, who served as consumer services minister when the planned redesign was launched last year, said Wednesday the intent of that work was to make the plates more flexible and durable. The previous models had been plagued by a defect that saw them flake and peel.

"Back when I was minister the intent was ... they were going to stand the test of time," Walker said.

A number of groups have begun to express concern about the impact the problem could have on public safety. The Ontario Association of Chiefs of Police has said it has been hearing from front-line officers and concerned citizens about the possible defect.

Mothers Against Drunk Driving Canada said it has asked the government to look into the reported issues.

"The ability to clearly see the licence plates is obviously crucial if people need to call police to report suspected impaired drivers, or other dangerous drivers," the organization said in a statement. "MADD Canada joins those asking the Government of Ontario to review the visibility of these new plates at night."

A spokesman from the City of Toronto said some new photo radar cameras have been unable to read the jurisdiction name on the new plates because of the small font size.

"An officer must be able to identify a vehicle's rear licence plate, including the name of jurisdiction, to lay a charge," Hakeem Muhammad said in a statement, noting the problem has been reported to the province. "This is a requirement to be able to prosecute under the law."

"They need to get the plates right," he said. "It's a public health and safety concern when you can't read the plates.... They just need to say, 'Hey, we made a mistake, we're going to fix it and we're going to take the time to get this right."'Shawn Jeffords

NDP Leader Andrea Horwath said the government is trying to throw the manufacturer "under the bus" and should instead look at its own internal processes.

"There is obviously something that went wrong with the way the government procured these particular plates and they need to step up and take responsibility for that and then fix it," she said.

This report by The Canadian Press was first published Feb. 19, 2020.