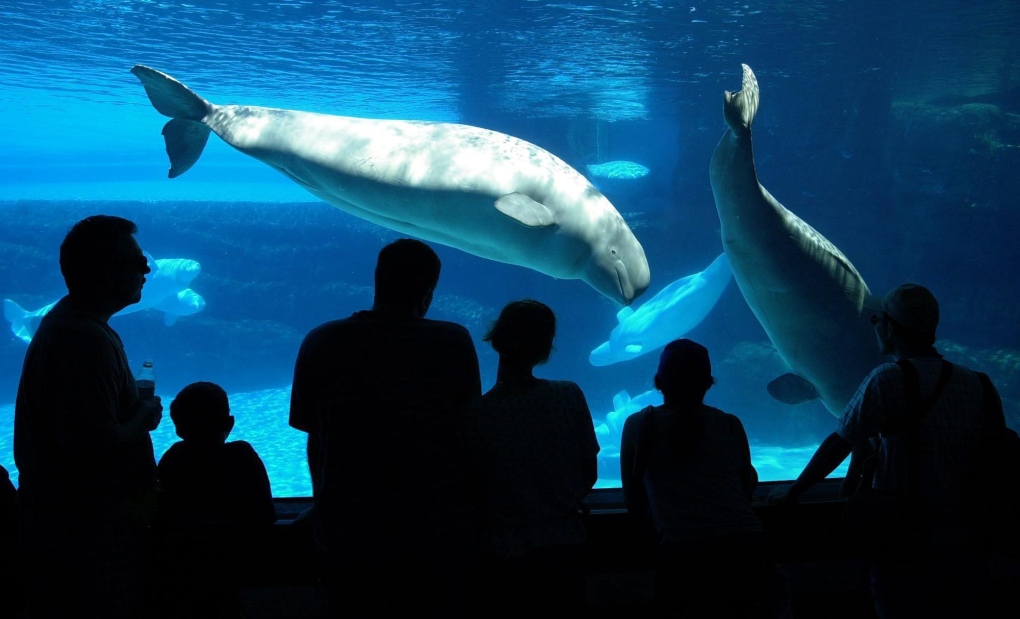 Tourists line up at a viewing area to see two Marineland attractions, a Killer Whale calf swimming with its mother and a small pod of Beluga Whales in Niagara Falls, Ont. on Wednesday July 18, 2001. (Scott Dunlop / THE CANADIAN PRESS)

TORONTO -- The Ontario government vowed Wednesday to strengthen its animal welfare laws following allegations of mistreatment of animals at one of the province's amusement parks.

Community Safety Minister Madeleine Meilleur said the province plans to introduce legislation by the spring that will beef up regulations to ensure the safety and health of animals kept in zoos and aquariums, including Marineland.

That entails strengthening the existing Ontario Society for the Prevention of Cruelty to Animals Act as well as introducing new rules that apply to marine animals.

But first, the province will work with animal experts and other stakeholders to come up with standards for caring for captive animals, Meilleur said in a news conference.

"I don't want to rush the process... We don't have anything specific, so that's why we are doing this review," she said.

Regulators will also look at licensing the province's more than 60 zoos and aquariums, she said. As it is, there is nothing in the law to prevent anyone from owning exotic animals.

The move comes under mounting pressure from animal welfare activists -- including former Marineland staff -- who allege animals at the amusement park aren't being looked after properly.

Marineland, the OSPCA and the Canadian Association of Zoos and Aquariums, an industry group with its own health and safety standards, all said they welcomed the prospect of tighter rules.

But some of those at the heart of the movement said the government's proposal simply delays making any real changes.

"I would say there's more than enough evidence out there to surmise and recognize the voids in the laws and the problems that currently exist," said Philip Demers, a former Marineland animal trainer behind some of the allegations.

"The time for action is now. The more we delay -- the more the government delays -- the less likely I believe anything is going to happen."

The New Democrats echoed his concerns, while the Progressive Conservatives suggested lax enforcement, rather than weak regulations, is the problem.

"The OSPCA has the tools in its toolbox right now to do what needs to be done to protect animals at Marineland or any other water park or anywhere else for that matter," said Tory critic Peter Shurman.

"It would be nice, before we create new regulations, to take advantage of the ones that we have and see to it that they're being properly administered and enforced and animal life is being protected in Ontario."

The OSPCA's role in enforcing animal protection regulations will also be the subject of scrutiny under the proposal, given that the organization also operates animal shelters.

A report released Wednesday by the province's Animal Welfare Task Force recommended changes to clarify the organization's powers and ensure its own shelters are inspected by an independent party.

The province stood firm in defending its animal protection laws even as it pledged to reform them, calling them the "strongest" in the country.

While Ontario's existing legislation, which includes a ban on puppy mills, earns it top marks for helping domesticated animals, "as far as captive wildlife is concerned it is very weak," said Julie Woodyer of Zoocheck Canada, a national animal welfare charity.

"The keeping of native species as pets is generally prohibited in Ontario but anyone can keep a tiger in their backyard, provided there is no municipal bylaw banning these types of pets," the organization wrote in a document comparing provincial regulations governing animals.

Alberta enacted legislation in 2006 to license zoos and set animal care standards for the facilities.

According to the Zoocheck document, several other provinces -- including New Brunswick, Nova Scotia, Prince Edward Island and Quebec -- require that anyone looking to keep wildlife first obtain a licence or permit.

Demers said Wednesday he's baffled to see the province stand by an "obviously flawed" system but will keep up the pressure to push through change at Marineland.

Dozens of protesters rushed the gates of the park this weekend, calling for an end to animal captivity.

And critics of the park have delivered a petition with 77,000 signatures to the provincial legislature in an effort to spur the government to take immediate action.

Both CAZA and the OSPCA each launched investigations after the former employees complained that poor water quality and other issues was risking the health of the animals.

CAZA said it found no major issues at the park, aside from an issue with the maintenance of the water management system.

Marineland agreed to have an independent assessment of their systems and unannounced inspections by CAZA in the future.

The park has said its primary concern is to provide a safe and healthy environment for their animals.

The OSPCA is continuing its investigation, but recently said it had identified "some areas of concern."