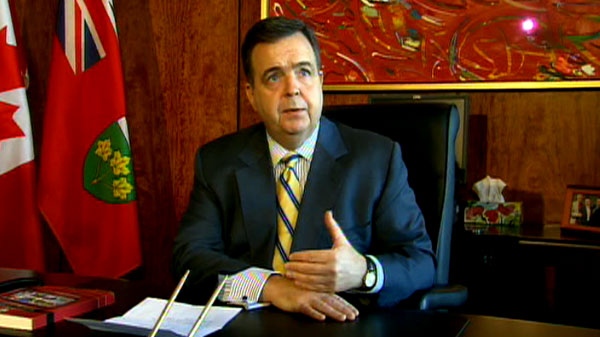 TORONTO -- Ontario may privatize the agency that assesses homes for municipal taxes, Finance Minister Dwight Duncan suggested Wednesday after the Progressive Conservatives complained about an "extravagant" meeting put on for employees of the Municipal Property Assessment Corporation.

The Tories accused the Liberal government of mismanagement after MPAC decided to hold a retreat in Toronto for 1,300 employees from across the province, giving them Lego blocks for "team building" exercises.

"You can't talk about fiscal responsibility out of one side of your mouth, and at the same time allow your employees to organize a convention right smack in the middle of the Toronto International Film Festival, when hotel and convention space are at a premium," said Tory finance critic Peter Shurman during question period.

"This is a convention where government employees will be wined and dined, the event catered by a vendor who boasts that they've served the likes of Oprah, Elizabeth Taylor and Karl Lagerfeld. How very TIFF of you premier."

Premier Dalton McGuinty punted the question to Finance Minister Dwight Duncan, who agreed that the MPAC employee convention in Toronto was a bad idea.

"I thought it was kind of a boneheaded thing to do," Duncan told the legislature.

"I don't understand it. It's not a good use of money."

MPAC defended the meeting, saying it needed to bring employees together to talk about major changes planned over the next four years that will save the agency about $20 million.

The total cost of the event was $170,000, including a suburban hotel for fewer than 100 employees and a return flight for 30 workers from northern Ontario, said MPAC chair Dan Mathieson.

"We consulted some leading change experts and they said the best way was to get everyone in a room and just lay it all out," Mathieson said in an interview.

"We looked at the cost of doing it on a regional basis and it wasn't much of a savings because we would still have to move people around."

As for the Lego blocks, Mathieson said MPAC will be supporting Habitat for Humanity and employees will bring their three Lego pieces together to build a house, which will eventually be turned over to a family that gets a real home built by volunteers for the charitable group.

A frustrated Duncan said MPAC is operated by the municipalities and the province really has no authority over it, and suggested the government would look at privatizing the agency.

"The whole MPAC construct, where I appoint members based on the recommendations of (municipalities), where we have two members, this is not acceptable," he said.

"We're going to have a long, hard look at the future of MPAC because Teranet is running much better now the way it's structured."

Teranet is a private company that was given a 50-year contract to run Ontario's electronic land registry system in 2010.

The New Democrats criticized Duncan's talk about privatizing MPAC, saying that kind of policy-on-the-fly from the Liberals never works.

"They got caught like a deer in the headlights with this and now they're throwing solutions up against the wall to see what's going to stick," said NDP Leader Andrea Horwath.

"It's that kind of back-of-the-envelope decision making that has gotten this government into trouble time and time again."

A 2010 report from Auditor General James McCarter criticized MPAC for staff travel and hospitality expenses that "appeared excessive or otherwise inappropriate," including such things as Taylor Made golf clubs, Nintendo consoles and iPods. McCarter also found one out of every eight property assessments was more than 20 per cent higher or lower than actual sale price, and said homes that were supposed to be assessed at least once every 12 years would, at best, be evaluated once in 18 years.

The Tories say MPAC is just another example to add to the list of Liberal failings that also include scandals at the Ornge air ambulance service and eHealth Ontario.