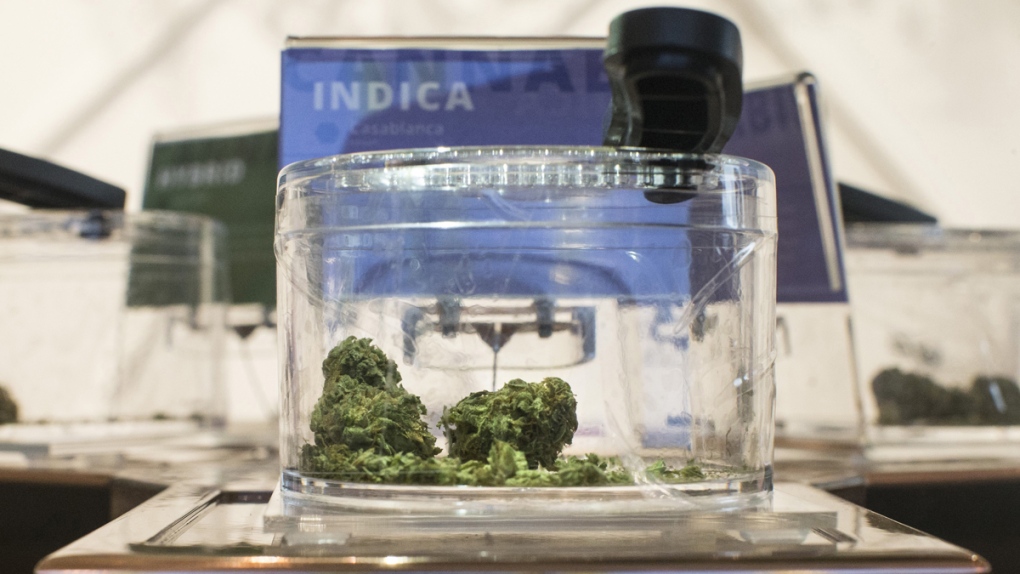 Cannabis is shown in a display jar on the first morning of opening for a Toronto retail store licensed to sell cannabis in Ontario, on April 1, 2019. (Chris Young / THE CANADIAN PRESS)

TORONTO -- The Ontario Cannabis Store said Tuesday it will launch consultations aimed at getting the private sector more involved in marijuana storage and delivery.

The Crown corporation's CEO said in a statement that the agency will consult with federally licensed producers and retail store owners later this month on the possible change.

Cal Bricker said the OCS will then make recommendations to the Ontario government to ensure sufficient distribution capacity is in place to combat the illegal market.

"As the exclusive wholesaler and distributor of legal recreational cannabis in Ontario, the OCS remains focused on its primary objective of combating the illegal market and protecting our youth and communities through overseeing a safe and secure cannabis distribution network across the province," Bricker said.

But he also acknowledged that the province's plan to further expand recreational cannabis stores and the coming launch of edibles make it a good time to explore changes.

"While centralized distribution services have served existing retailers ... the OCS is taking prudent steps to consult the industry on opportunities to increase their involvement in participating in the storage and transportation of cannabis products to retail stores," he added.

This OCS has been struggling to meet the demand for recreational cannabis, and earlier this month the agency said it lost $42 million in the latest fiscal year ended March 31. The government blamed the initial startup costs for the loss.

Meanwhile, the number of legal pot outlets in Ontario is expected to grow from 25 to 75 this month.

Cannabis was legalized for recreational use in Canada on Oct. 17, 2018.

The Progressive Conservative government had initially said there would be no cap on the number of retail pot shops after cannabis was legalized. That decision marked a change of course from the previous Liberal government, which created the OCS and had planned to tightly control cannabis sales through government-owned stores similar to the LCBO.

But the supply shortage prompted the Tory government last December to cap the initial number of pot retail licences to just 25 so operators could open for business on April 1.

This report by The Canadian Press was first published Oct. 15, 2019.