Only 14% of water bottles make it to recycling process: Polaris Institute 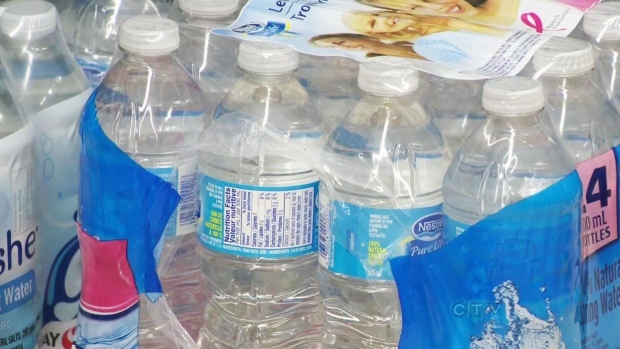 TORONTO -- Ontario is being urged to consider the environmental impact of plastic bottles as it updates the provincial policy on water taking permits for bottled water companies.

Environmentalists who worry that bottling companies like Nestle can take millions of litres a day from Ontario wells when communities need it for their drinking water are also concerned about where millions of empty plastic water bottles end up.

Nestle estimates about 70-75 per cent of the water bottles are recycled in Ontario.

Stewardship Ontario, the non-profit organization that runs the province's Blue Box program, couldn't say exactly how many water bottles end up in landfills, but estimated 66 per cent of plastic beverage containers used in homes get recycled.

"Stewardship Ontario's program pertains only to residential waste stream and therefore our data does not capture the entirety of plastic beverage containers...recycled through other collection systems such as businesses, hospitals, etc., or the amount that finds its way to landfill," said spokeswoman Karen Ramlall.

However, the Ottawa-based Polaris Institute, a non-profit organization that "challenges the influence of corporations on government and public policy," estimates only 14 per cent of plastic water bottles get recycled in Ontario.

Polaris warns that many plastic bottles end up in landfills, "or worse, as litter in forests, lakes and oceans," and says it takes roughly the equivalent of one-quarter of a bottle of oil to produce and transport each bottle of water to stores.

The group Environmental Defence said up to one billion plastic bottles do not get recycled in Ontario each year, and called for a deposit system similar to beer and wine bottles to boost recycling rates.

"Canadian provinces and territories with deposit return programs recycle 72 to 95 per cent of their plastic bottles," said spokeswoman Jennifer Mayville.

"While reports on how many of these get recycled vary -- many plastic bottles end up in our forests, parks, rivers and lakes and many end up in landfills where they take hundreds of years to break down," said council chair Maude Barlow.

In her new book "Boiling Point," which is about what Barlow calls Canada's "water crisis," she points out that Canadians buy about 2.4 billion litres of bottled water a year, about 68 litres per person.

"The waste footprint of this industry is huge," she said. "I would like to see the government of Ontario ban bottled water operations altogether and kick Nestle out."

The U.S. Container Recycling Institute estimates about 30 million plastic water bottles are thrown away, and not put into recycling containers, every day.

Alex and Tyler Mifflin, stars of The Water Brothers, an eco-adventure TV series, said the bottled water industry creates far too much waste, and encouraged people to carry reusable containers that they can refill from their taps.

"It would be more convenient to have your own reusable bottle and bring it with you for the day," Tyler said in an interview. "The convenience factor is not really an excuse any more."

Some Ontario municipalities, including Toronto, and some school boards have implemented a ban on bottled water sales in their facilities.

The province passed new legislation last summer that will divert more waste from landfills, by encouraging "innovation in recycling processes" and require producers to take full responsibility for their products and packaging.