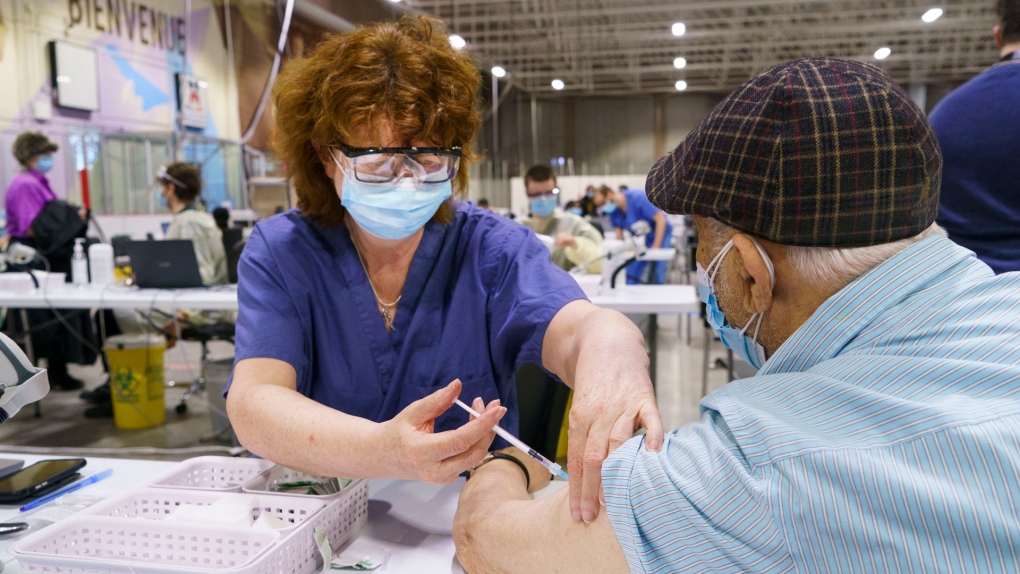 FILE- A senior citizen receives a first dose of COVID-19 vaccine at a vaccination clinic in a hockey arena in Montreal, on Wednesday, March 10, 2021. THE CANADIAN PRESS/Paul Chiasson

KITCHENER -- Research led by the University of Waterloo finds that the pandemic has increased older adults’ willingness to receive the flu shot.

According to a news release, the study analyzed survey results of over 4,500 Canadians over the age of 50 from 10 provinces.

It found that 20 per cent of 1,001 research participants aged 50 to 64 indicated they had not considered getting a flu shot, but were now more likely to given the impact of COVID-19.

Of these respondents, 92 per cent indicated that they had not been vaccinated against influenza the year before.

According to researchers, of the 3,500 participants in the study aged 65 and older, eight per cent reported that they had not originally planned to get a flu shot, but were now more likely to receive it.

“The pandemic has been a sobering demonstration of the dangers of infectious diseases,” said Nancy Waite, a professor at the School of Pharmacy and the lead author on the study in a news release. “We’ve seen changing perceptions of the value of vaccines and a documented change in people’s willingness to consider getting vaccinated.”

Participants of the study who said they would not get the flu shot cited various reasons for the decision.

According to researchers, some participants said COVID-19 demonstrated the devastation potential of viruses; others also cited the increased risks due to COVID-19 and influenza circulation simultaneously.

The study also found that just over two per cent of 50- to 64-year-olds and 0.8 per cent of respondents 65 years and older indicated that although they had previously received the influenza vaccine, they were less likely to consider getting the shot during the pandemic out of fear of being exposed to COVID-19 when receiving their dose. They also believed they were less likely to contract influenza due to social distancing.

“It is helpful for health-care providers who have vaccine conversations with the public to understand the context in which individuals are making decisions. These contexts are fluid, and we need to answer the questions individuals currently have to help them make informed decisions,” Waite said in the release. “Our findings demonstrate that the pandemic has created new motivations for many older adults to be accepting of the influenza vaccine but has also created concerns for a small group that health care professionals should be prepared to address.”

Along with work from the University of Waterloo, the study featured cross-disciplinary research from Laval University, Dalhousie University and JRL Research and Consulting.