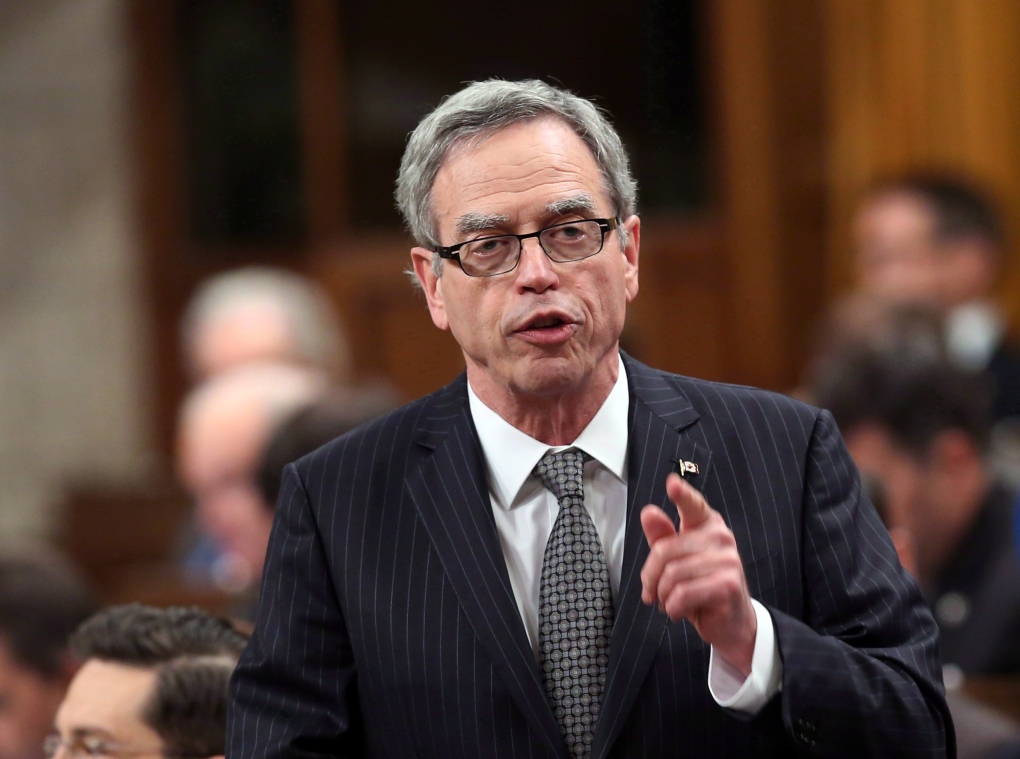 Finance Minister Joe Oliver stands in the House of Commons during Question on Parliament Hill in Ottawa on November 20, 2014. (Fred Chartrand / The Canadian Press)

DAVOS, Switzerland -- Finance Minister Joe Oliver says he will not budge from his plan to deliver a balanced budget come April, even with the recent decline in crude oil prices.

In an interview with The Canadian Press at the World Economic Forum in Davos, Oliver said Thursday he's rejecting suggestions that a small federal budget deficit would be economically acceptable and he insisted the government won't return to a deficit.

Experts suggest the federal government books will teeter on running another deficit in 2015-16, although the Harper government insists it will meet its commitment to balance the budget.

The promise was made years ago and is expected to be a key issue in this year's federal general election.

"We think it's wrong morally to transfer debt to our children for our current expenses," Oliver said. "And we want to be in a strong fiscal shape to respond to international shocks."

One those shocks is the price of oil, a key Canadian export.

Since last summer, the global price of oil plunged from more than US$100 a barrel to under US$50 a barrel -- with the biggest drop coming after the OPEC oil cartel said in late November that it wouldn't cut output to prop up the price.

In November, Oliver warned falling oil prices could cut $2.5 billion per year from the federal books between 2015 and 2019. Since that calculation, the price of crude has tumbled further.

Oliver's comments came a day after the Bank of Canada shocked the business world by dropping a key lending rate by one-quarter of a percentage point in response to the huge decline in crude oil prices since November. Economists had expected the rate to be stable until it was increased sometime this year, although the timing was a matter of debate.

The low price of crude is expected to remain for some time and many Canadian oil and gas producers have announced plans to cut back spending by billions of dollars -- creating a ripple effect through the entire economy.

The finance minister said that he wasn't aware in advance of the Bank of Canada's decision to cut its trend setting rate Wednesday to 0.75 per cent, but added he was "not surprised" by the announcement by the central bank and that it had no bearing on his decision to delay the release of the upcoming federal budget.

Oliver announced last week he would postpone the release of the 2015 federal budget until April at the earliest.

The budget usually comes before the end of the fiscal year on March 31.

Despite the criticism from opposition parties, Oliver says the delay will give him more time to analyze the situation.

Oliver wouldn't say if the government would dip into its $3 billion contingency fund to offset the loss of federal revenues from oil, but acknowledged his "flexibility" has decreased as prices have dropped.

"We do not intend to cut programs but we must recognize that flexibility has decreased, that's clear," Oliver said.

He also attempted to mitigate comments by federal Employment Minister Jason Kenney, who suggested the Conservatives would have to consider spending cuts, but predicted they will keep the government's hands off its contingency fund.

"My portfolio is Finance and I am aware of the thoughts (of Mr. Kenney)," Oliver said. "We will not make cuts (in social programs), and we will honour our commitments."

As for the International Monetary Fund's recent downgrade of its 2015 growth forecast for the Canadian economy, Oliver was not particularly worried.

Earlier this week, the IMF said it expected economic growth of 2.3 per cent in Canada in 2015, down from 2.4 per cent in its forecasts issued three months ago. The agency is lowering its overall outlook for global growth.

"They only reduced the growth of 0.1 per cent," Oliver said. "It's not a big percentage. We will review the projections of 15 private sector economists before the budget and we will make our tax conclusions. "

The IMF also decreased its projection for next year's growth to 2.1 per cent -- a drop from the 2.4 per cent forecast it made in October.

The Bank of Canada was even more pessimistic in a revised estimate issued Wednesday along with the rate cut. The central bank now estimates 2015 GDP growth will be 2.1 per cent (after dropping to 1.5 per cent in the first half of the year) and 2.4 per cent in 2016.