STRATFORD -- A public rally planned in Stratford for the weekend, in defiance of public health restrictions meant to fight the COVID-19 pandemic, is a source of concern for public officials with the city.

On Tuesday, the City of Stratford, Stratford Police Service and Huron Perth Public Health issued a joint statement encouraging residents to follow the measures set out in the province-wide stay-at-home order and the guidance of public health measures as it recognized a rally being organized in the city for this weekend.

“We are aware of a public assembly being planned for this weekend in Stratford,” the statement said in part. “City and police officials have reached out to the organizers in an effort to underscore the importance of respecting the Stay-at-Home order and its restrictions.”

The City of Stratford, Stratford Police Service and Huron Perth Public Health have issued a joint statement on public gatherings, and the importance of following the province-wide Stay-at-Home order.
Read the statement at https://t.co/iwyIAgV3ki@SPSmediaoffice @HPPublicHealth pic.twitter.com/3T6i4duN6q

"Huron Perth Public Health is aware of a public assembly being planned for this weekend in Stratford, and we share the community’s concern about the risks of a large group activity being planned at this stage of the pandemic," a statement from Huron Perth Public Health officials said in part. "We understand that people are tired and frustrated, and want this to be over. We’ve been in this situation for over a year now, and we recognize the incredible stress that everyone has been through over the course of the pandemic."

"However, we also recognize the reality of the third wave of COVID-19 that we are currently in, and the need to support our hospital and primary care partners, as well as everyone who depends on them. Our local hospital has been accepting patients from outside of the area in order to help the strained healthcare system, and we need to support them by continuing to follow the public health measures designed to help stop the spread of COVID-19 in our communities. While these measures may be inconvenient and difficult at times, they are intended to help keep people safe and prevent the risk of serious illness and hospitalization from COVID-19."

“We’re going to take a measured approach to this,” said Police Chief Greg Skinner. “We have communicated with the people who have been advertised to be speaking at this event.” Skinner says Stratford police have yet to lay a charge tied to non-compliance of public health orders or the Reopening Ontario Act. “We will have police visible on scene. We will be monitoring the event. We will be video taping the event and if there are any blatant and flagrant abuses or contraventions of the legislation, then we will take the appropriate action at the appropriate times,” said Skinner.

Skinner says he understands the community frustration associated with large rallies taking place while many adhere to Ontario’s stay-at-home order.

“I share the frustration,” said Skinner. “This has been difficult on so many people, on so many levels.”

For many businesses in downtown Stratford, seeing the poster advertising the planned anti-lockdown demonstration is disheartening. 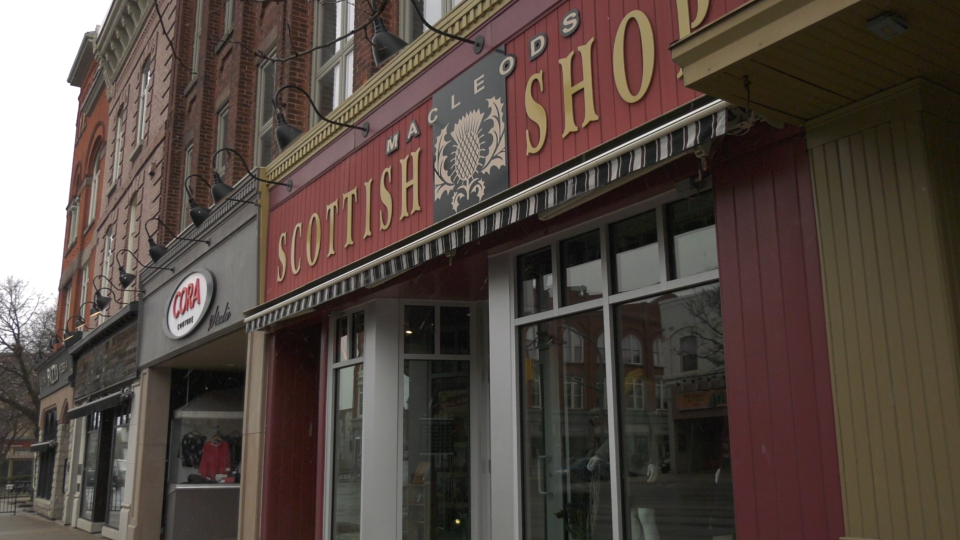 “We were really disappointed. I mean, reckless and irresponsible [are] really the two best words I can use to sum up an event like that,” said Rob Russell, co-owner of Macleods Scottish Shop in downtown Stratford.

Russell is a member of the Stratford City Centre Business Improvement Association and said the overwhelming sentiment among members is ‘frustration’ with the increasing number of ‘No More Lockdowns’ rallies.

“If you’re looking at it getting angry about this type of stuff, everybody wants to be angry about it but, getting angry in the moment, isn’t going to give us the long-term success we need,” said Russell. “Unfortunately, we do have to endure these hardships. We have to keep pushing forward.”

CTV News reached out to organizers of the event who were unavailable for an interview.

On Sunday, a rally with more than a 100 people in attendance was held in Uptown Waterloo, with many in attendance holding ‘anti-lockdown’ signs.

The provincial orders restrict gatherings both indoors and outdoors as a means of combating the highly transmissible coronavirus which causes COVID-19, and has stressed health systems across the country.

The Ontario government announced new measures on April 16 to reinforce its stay-at-home order including prohibiting all outdoor social gatherings and organized public events, except those with members of the same household. Non-essential workplaces in the construction sector were also closed, retail capacity limits were cut to 25 per cent and all outdoor recreational amenities have been closed.

On April 17, the government reversed the measures as they relate to playgrounds.