Officer who shot an armed man in 2021 won't be charged: SIU

Officer who shot an armed man in 2021 won't be charged: SIU

An officer with the Waterloo Regional Police Service won't face charges in connection to the 2021 shooting of a 19-year-old man in Kitchener, as the SIU determined the victim wanted to provoke the officer into killing him.

Ontario's Special Investigation Unit announced their decision on Friday and said there was "no reasonable grounds to believe that the officer comported himself other than lawfully throughout his engagement" with the victim.

At around 6:50 p.m. on August 18, police received a report of a man in distress near the Laurentian Power Centre at Ottawa Street South and Strasburg Road. They said when officers arrived, the man drove his vehicle into a police cruiser. He threatened the officer with a knife, then got out of the vehicle and jumped over the hood of the cruiser, before chasing the officer. 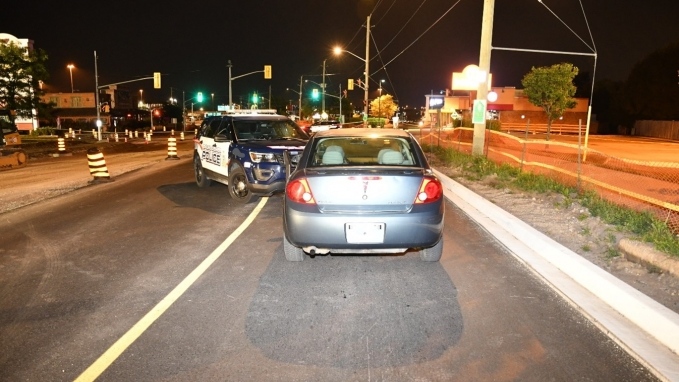 A photo of the WRPS cruiser and the vehicle belonging to the man taken from the SIU's report.

The SIU's report said when the man ignored commands to stop, the officer fired his gun once and the man was hit in the right knee, causing him to collapse onto the ground. He then got back up and charged at the officer. The SIU said the officer fired another shot, followed by seven more as the man continued to follow him.

The officer then fell and dropped his gun. The man picked it up "momentarily" before the officer approached him from behind and a physical altercation ensued. The two struggled until other officers arrived on scene and took the man into custody.

The man was transported to hospital with gunshot wounds to his left arm, as well as his left and right legs. His injuries were considered non-life threatening.

The SIU's report said a black-handled butcher-style knife, approximately 34 centimetres long, and a handwritten note were found at the scene. 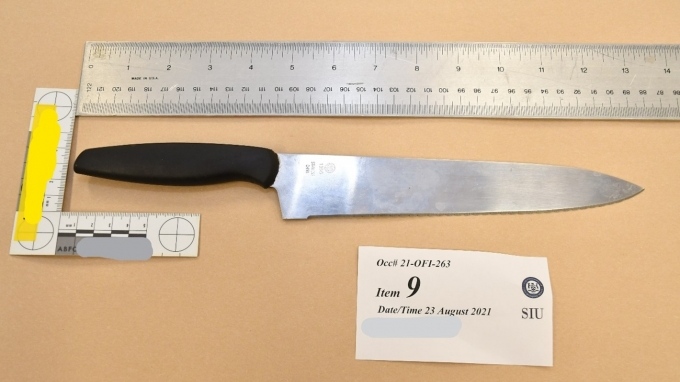 A photo of the knife the man was carrying during his interaction with WRPS from the SIU's report.

Investigators determined that the man had decided to end his life by provoking a police officer into shooting him. His plan, according the SIU report, was to purchase a vehicle and drive it without license plates. When stopped by police, he intended to threaten the officer with a knife, forcing them to shoot him.

The report goes on to say that the man's family learned of his plan through his social media posts and contacted police.

The handwritten note was addressed to "Officers and Friends and Family" and, according to the SIU, apologized to the police officer "he hoped and planned would ultimately kill him."

The SIU determined that "there is little doubt that the [officer] acted with proportionate and reasonable force when he sought to defend himself from a knife attack with lethal force of his own."