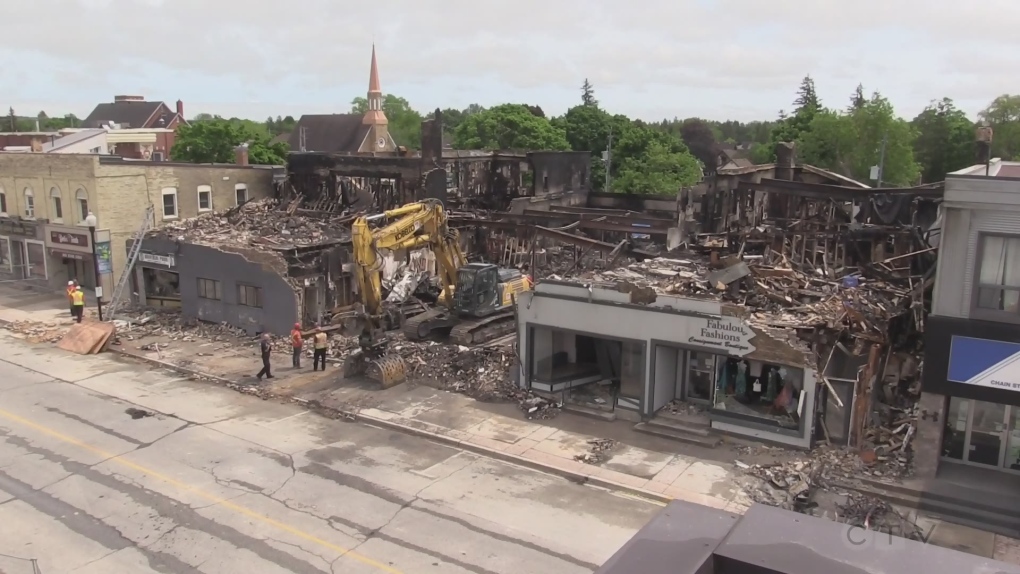 Ontario's Fire Marshal has completed its investigation of the two buildings destroyed by fire in Hanover, Ont., according to Hanover Chief of Police Christopher Knoll.

In a tweet posted Monday, Knoll said "the search of the occupied areas of the fire-gutted buildings has found no human remains."

.. the roadway and sidewalks of any debris before they are reopened. It is anticipated the Downtown Core will be reopened to traffic & pedestrians in the morning to resume regular business hours. Thank-you for your patience and stay tuned.

The fire impacted 70 residents and the buildings were demolished due to a concern the structure could collapse.

According to police, 10th Street was closed between 9th Avenue and 10th Avenue as crews began demolition of the two buildings on Friday. Knoll said "these buildings have been demolished for public safety reasons and work is underway to clean up the roadway and sidewalks of any debris."

On Tuesday morning, Knoll confirmed that the stretch of downtown Hanover had reopened.

FIRE SCENE UPDATE - Public Works removed debris on the street & sidewalks, security fencing was installed as demolition crews continue to work along the back side collecting recyclable materials. The Downtown Core was completely reopened for traffic & pedestrians as of 6:50 a.m. pic.twitter.com/GxXMC9vt20

Hanover Police and the Ontario Fire Marshal's Office have yet to confirm a cause of the fire.

Police officers in cruisers, on foot patrol and on bicycles are patrolling the Parliamentary Precinct, the ByWard Market and the so-called 'motor vehicle control zone,' as the city prepares for Canada's 155th birthday celebrations and possible protests.

Conservative leadership candidate Pierre Poilievre joined the final leg of a march led by a Canadian soldier charged for speaking out against COVID-19 vaccine requirements that has sparked promises -- and fears -- of a new wave of protests in the capital.

Multiple crashes involving bears in a B.C. national park earlier this month prompted a crackdown on drivers in the area, according to the B.C. Highway Patrol and Parks Canada.

Here's what Air Canada and WestJet have said about reducing flights

Two of Canada's largest airlines announced steps this week to cope with delays, cancellations and service issues. Head to CTVNews.ca to read about the changes announced by Air Canada and WestJet.

Ottawa protest organizer Tamara Lich will spend at least five more nights in custody in Ottawa after she was arrested in Alberta for allegedly breaching bail conditions.

Saanich police will hold another update on a deadly shooting that took place on Tuesday afternoon, leaving two suspects dead and six officers with gunshot wounds.

The Conservative Party of Canada says approximately 675,000 members will be eligible to vote in this year's leadership race.

Omicron cousin BA.5 predicted to cause nearly 70 per cent of COVID-19 cases by Canada Day

Researchers examining the threat of emerging COVID-19 strains predict Omicron BA.5 will account for nearly 70 per cent of cases in much of the country by Canada Day.