KITCHENER -- The firefighter who was critically injured in a home explosion in London, Ont. in 2019 said in a victim impact statement that his fellow responders didn’t think he was going to survive.

Daniella Leis, a Kitchener woman, drove into a home on Woodman Avenue in August of that year, severing a gas line and causing an explosion that left seven people injured, including two firefighters.

The accused pleaded guilty in October to four counts of impaired driving causing bodily harm for her role in the explosion.

In a victim impact statement, one of the injured firefighters—who is from Waterloo Region and had only been a career firefighter for 2.5 years—said the explosion knocked him unconscious. He said he sustained facial trauma, broken bones, severed ligaments and long contusions in the blast.

The Crown Attorney relayed the firefighter's wishes that his name not be used in this reporting and CTV Kitchener has decided to honour his request.

"My facial trauma is most noticeable, with extreme scarring and partial loss of the structure of my left ear, along with missing teeth and part of my upper pallet that impact my self-esteem," his victim impact statement read in part.

He said his body was "peppered with open wounds" which needed stitches, and with bruises that left his whole body discoloured. 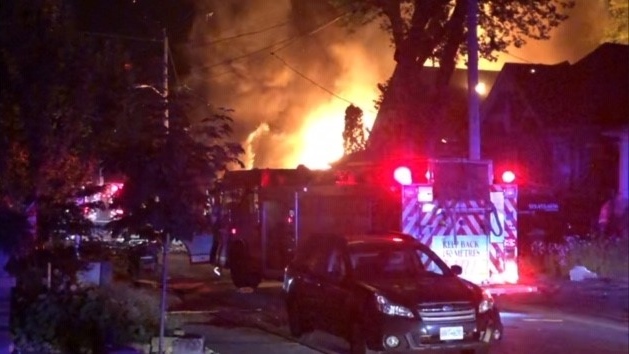 Emergency crews on scene during explosion on Woodman Avenue on Aug. 14, 2019.

His initial stay at the hospital was eight days.

"The only thing I wanted during this time was to go home and be with my family," the statement said. Married for just over a year, he and his wife had a three-month-old baby at the time of the blast.

"But once there, life was nothing like it had been."

The man said he couldn't stand on his own. His hands were bandaged and useless and he needed help. Because of the facial trauma he suffered, his food had to be blended.

"For the first few days I could only eat and sleep."

He explained that it became necessary for another family to be there at all times to help with the couple's new reality. The firefighter outlined daily tasks like cleaning, errands, groceries and babysitting that he needed help with.

"Without them and their support, my recovery wouldn't have been possible," he said.

A LONG WAY TO GO

Still, that recovery is far from over, he explained.

"There is no end in sight to my recovery. There are more procedures for the years to come," his statement read.

"The trauma I now carry for the rest of my career is not just limited to my physical scars," the statement goes on.

"I know, to have an unprecedented incident of this magnitude happen to me, so early in my career will have a lasting impact on my mental health."

The firefighter was one of seven victims that submitted impact statements as part of Leis' sentencing hearing, which began last week.

During the hearing, Leis cried as she told the victims and the court via Zoom, "I can’t express how truly sorry I am for what I have done...for that I will never forgive myself."

She added, "I feel terrible for causing such significant damage...and I will never stop feeling sorry for my actions."

Richard Braiden, the woman's defence lawyer, is asking for a jail sentence in the upper reformatory or low penitentiary range, meaning around two years.

The woman's sentencing is scheduled to take place on Feb. 11.