No deal yet as next one-day strike approaches 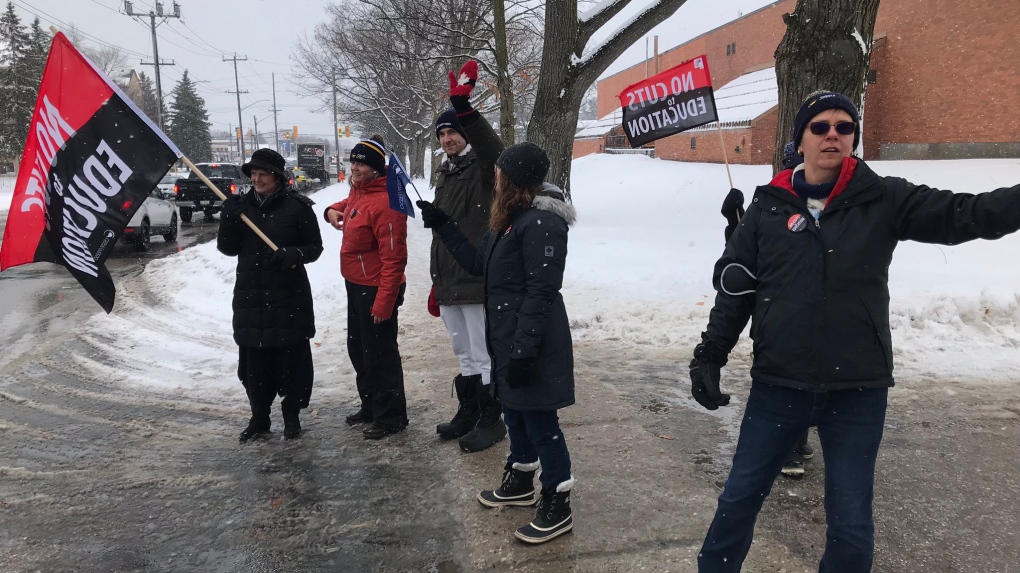 TORONTO -- Ontario's high school teachers and the provincial government dialed up attacks rather than labour negotiations on Tuesday, all but assuring that a midnight strike that promises to shutter schools in Toronto and other regions will go ahead.

Ontario Secondary School Teachers' Federation President Harvey Bischof said the union and the government have not held contract talks since last week and were not set to talk before Wednesday's job action.

Bischof said the strike could not be avoided despite Education Minister Stephen Lecce's pleas to call it off and enter into third-party mediation with the government.

"We have a government that hasn't said they want to meet us at the table," he said. "We've offered up dates through the mediator, we haven't heard back."

The one-day strike is the latest job action planned by the union in a bid to ramp up pressure on the government during the tense contract talks. It will impact a series of boards including Canada's largest, the Toronto District School Board, as well as boards in Southwestern, Eastern and Northern Ontario.

It follows a province-wide strike last week that shuttered every public high school and some elementary schools.

The teachers have been without a contract since their last deal with the government expired at the end of August, along with contracts with all public education staff in the province. The government has inked deals with two unions representing education workers, but remains at odds with a number of other major teachers' unions.

Bischof said the union knows Wednesday's pending disruption will impact students and parents, but said teachers have no choice but to push back against increases in class sizes and mandatory e-learning courses.

"If we step back and allow this government to simply erode the quality of education, the long-term consequences of that will be disastrous," he said.

Bischof accused Lecce of ratcheting up rhetoric around the talks instead of engaging in constructive bargaining.

Earlier in the afternoon, the minister said meeting all the union's compensation and class-size demands, and applying those same terms to other education unions, would cost the province $7 billion over three years.

Lecce said bowing to the OSSTF's demands may leave the government with no other choice but to offer the same terms to other education labour groups.

"They choose not to consider the impacts outside of OSSTF as if they live in isolation to the other unions and education workers, but they don't," he said.

Bischof questioned the number, saying the OSSTF request for a cost of living increase -- which comes in at approximately two per cent a year -- would cost $200 million.

NDP leader Andrea also disputed the accuracy of the numbers, arguing Lecce's figures were intended to "confuse and worry" people ahead of the job action.

"Today, what we're seeing from Mr. Lecce is an obvious, desperate attempt to make this about anything but Mr. Ford's class size hikes, teacher layoffs and cuts to our children's education," she said.

This report by The Canadian Press was first published Dec. 10, 2019.