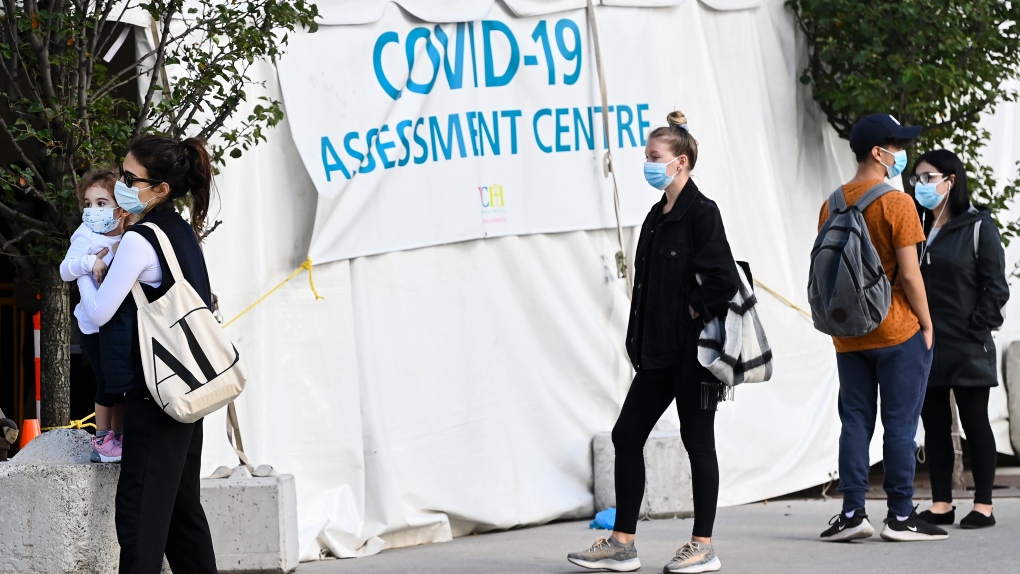 People wait in line at a COVID assessment centre at Women's College Hospital during the COVID-19 pandemic in Toronto on Wednesday, September 23, 2020. THE CANADIAN PRESS/Nathan Denette

KITCHENER -- Another nine cases of COVID-19 were reported in Waterloo Region on Wednesday morning.

There have been a total of 1,722 cases in the region to date, including 1,449 resolved cases and 120 deaths. There are 153 active cases, including one who is in hospital.

More than 131,000 tests have been administered in Waterloo Region since the pandemic began.

The region also declared one of its seven outbreaks over. A sports and fitness facility, identified by CTV Kitchener as F45 Training, had an outbreak declared after three people tested positive for COVID-19. Their outbreak has now been declared over.

There are still six other active outbreaks in the region:

The recent increase in cases in Waterloo Region has prompted public health officials to advise against traditional Thanksgiving celebrations as the holiday draws near.

During a Tuesday morning media briefing, Medical Officer of Health Dr. Hsiu-Li Wang suggested that people gather virtually instead, or limit their gathering to a small one without a meal.

That advice was delivered the day before Ontario public health officials updated their COVID-19 modelling data, which now predicts that the province could see 1,000 new cases per day by mid-October.

Dr. Wang addressed the new modelling, saying it was concerning but not surprising.

"Initially, Ontario’s second wave of COVID-19 was primarily impacting the 20-39 age group, but case growth is now occurring in all other age groups," she said in a statement posted to Twitter.

"This is what we’ve been concerned about for a while. This is why we cannot be complacent about the more recent surge in cases mostly in younger populations. This will only spill over into other age groups and vulnerable populations."

"Continue practicing physical distancing and wearing a face covering outside your small social bubble – this includes at family gatherings or while visiting friends. How this wave unfolds is in our hands." (4/4) pic.twitter.com/YwxbZeyPnr

Ontario as a whole logged another 625 infections on Wednesday, up from the 554 cases that health officials reported on Tuesday, but down from its highest-ever increase of more than 700 reported on Monday.

Why did B.C. have far fewer COVID-19 deaths in long-term care than Ont.?

U.K. experts warn coronavirus is out of control

What worries Canadian doctors most ahead of a second wave of COVID-19?