Nice day for a walk 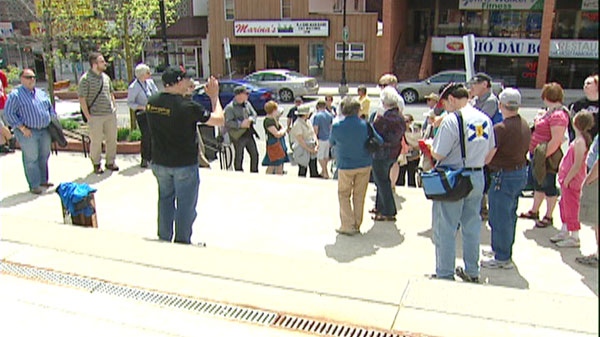 On a perfect Sunday, about 40 people took the time to get to know their neighbourhood a little better by taking part in a Jane's Walk in Kitchener.

Jane's Walk is a series of free neighbourhood walking tours that helps put people in touch with their environment and with each other, by bridging social and geographic gaps and creating a space for cities to discover themselves. The walks honour urban activist and writer Jane Jacobs who championed the interests of local residents and pedestrians over a car-centered approach to planning.

Jane's Walk has been taking place in Kitchener since 2007 and it's one of 85 cities around the world to hold the tours.

All Jane's Walk tours are given and taken for free. These walks are led by anyone who has an interest in the neighbourhoods where they live, work or hang out. They are not always about architecture and heritage, and offer a more personal take on the local culture, the social history and the planning issues faced by the residents.

Local guide, James Howe, says the tour give insights into neighbourhoods that often go unnoticed, "we're taking a look at east downtown Kitchener to see the gems that it contains and also the opportunities it holds."

As much as the tours are about getting to know familiar haunts, they also enable people to teach others, says Shirley Hambly.

"We'll learn other places to go, when we have company coming from other places, we can be the tour guides."

Jane Jacobs believed strongly that local residents understood best how their neighbourhood works, and what is needed to strengthen and improve them. Local organizers agree. Reid Foulton says he's lived on King Street East for a year now and takes notes of what others observe, "It's interesting to get to hear from other people who live along the street that they share some of the same experiences."

Jane Jacobs believed that cities were complicated and resistant to easy fixes – but that the solution lay within.

"Being human is itself difficult, and therefore all kinds of settlements (except dream cities) have problems. Big cities have difficulties in abundance, because they have people in abundance. But vital cities are not helpless to combat even the most difficult problems."