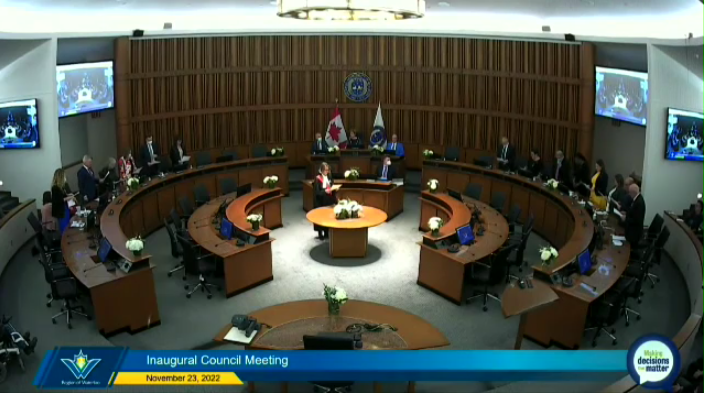 A freshly-elected regional council was sworn in Wednesday night, and new and returning faces took their seats in the chamber.

Out of eight Waterloo region councilors, six will be new to the role.

There are a few familiar faces as well, including Karen Redman who returns for her second term as chair along with incumbent councillors Michael Harris and Jim Erb.

While Chantal Huinink will be the first woman councillor living with a physical disability.

Redman said that during her term there are many prioritized items on her list to address such as housing, attainability, affordability, and people living unsheltered. She also noted that residents are concerned about healthcare.

“That is not our mandate but we need to continue to petition the provincial and federal government so that health services get funded appropriately because all of those things add to the angst of the people living on the margins already,” she said.

Police have released a video of a driver who smashed a vehicle through the doors of Vaughan, Ont. mall early Wednesday before allegedly breaking into an electronics store.

Nearly 130,000 Helly Hansen sweaters and hoodies have been recalled in Canada due to flammability concerns.

The federal government is expected to introduce a law as early as Thursday to delay the extension of medically assisted dying eligibility to people whose sole underlying condition is a mental disorder.