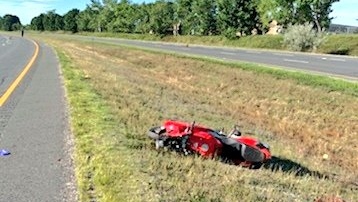 A motorcycle rider has suffered serious injuries following a crash on Hwy. 85 in Waterloo.

OPP say witnesses called 911 Saturday morning when they saw a rider and a motorcycle in the ditch of the highwayheading north bound near King Street.

Lanes of traffic were closedfor an investigation, but have since reopened.

Cambridge OPP are investigating the incident. There is no word yet on the cause of the crash.

Ambassador Bridge on the Canadian side closed Sunday evening

After two years of COVID-19 restrictions curbing Halloween, Canadians are expected to ramp up celebrations this year. But the rising cost of goods and ongoing supply chain issues could put a kink in demand for costumes, candy and decorations.

Brazil's top two presidential candidates will face each other in a runoff vote after neither got enough support to win outright Sunday in an election to decide if the country returns a leftist to the helm of the world's fourth-largest democracy or keeps the far-right incumbent in office.