Motorcyclist dead after crash on Hwy. 401 near Guelph 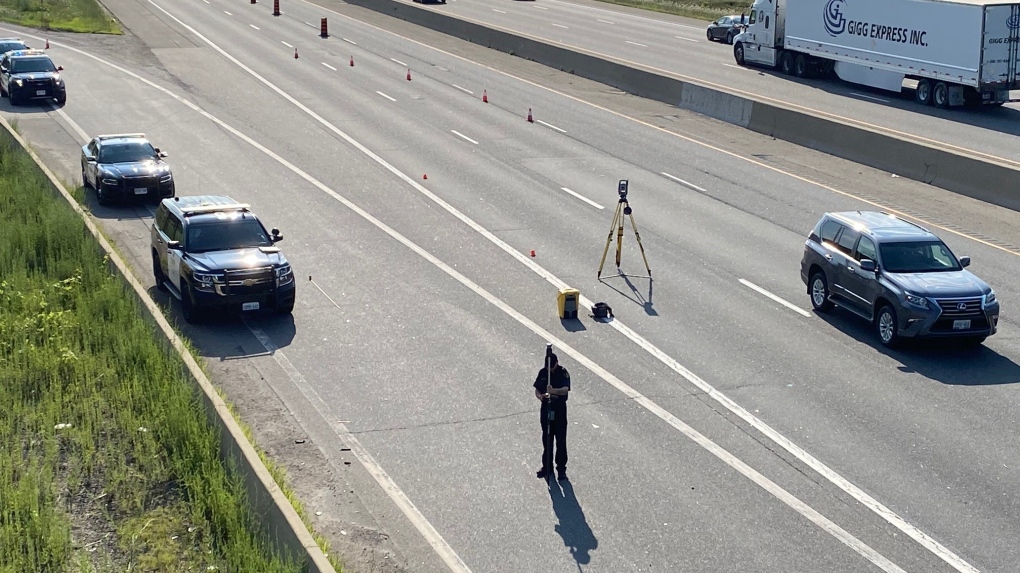 A motorcyclist is dead after a crash on Highway 401 near Guelph.

The collision happened Thursday around 3 p.m. near the Highway 6 overpass.

Ontario Provincial Police say the victim is a 57-year-old Oakville man, who was pronounced dead on the scene.

OPP Sgt. Kerry Schmidt said witnesses reported the motorcycle collided with the side of a transport truck.

"As the motorcyclist was merging on to the 401 eastbound, for some reason it lost control and ended up sideswiping a transport truck that was already in the eastbound right lane," Schmidt said. "The motorcycle got tangled up with the side of the trailer and ended up on the right shoulder of the highway underneath the bridge."

No other vehicles were involved. The driver of the transport truck was uninjured.

“The roads are dry. The sky is clear. The conditions are excellent. I don’t know why the motorcyclist lost control,” Schmidt said.

“Right now, we don’t know what was happening as far as what caused him to merge and drift into the path of that eastbound transport truck.”

All eastbound lanes between Hwy. 6 North and Hwy. 6 South were closed for the investigation, with police redirecting traffic. One lane reopened around 6 p.m. By 8 p.m., all lanes had reopened.

The investigation into the collision is ongoing.

Anyone with information or who witnessed the collision is asked to call Cambridge OPP.

Fatal motorcycle collision: #Hwy401 EB at Hwy6 north. The 57 year old rider from Oakville was pronounced deceased at the scene. One lane is open on EB 401, WB lanes are unaffected. pic.twitter.com/OZ336KbWCQ

Tight race between the Liberals and Conservatives, Nanos tracking shows

With the 2021 federal election just two days away, it is still a tight race between the Liberals and Conservatives, according to the latest polling data from Nanos Research.

There will be no let up in campaigning today as the main party leaders count down the remaining hours and minutes to Monday's federal election. The latest polling suggests Trudeau's Liberals and O'Toole's Tories are in a virtual dead heat.

Afghan schools will open for boys from Saturday, the new Taliban ministry of education said in a statement that gave no indication of when girls might be able to go back to their classes.

France's ambassador to Australia described Saturday as a 'huge mistake' Australia's surprise cancellation of a major submarine contract in favour of a U.S. deal, delivering a final protest as the envoy was recalled from the country in an unprecedented show of anger among the allies.

Gabby Petito's boyfriend has been missing since Tuesday: family

Police in Florida said late Friday that they are working with the FBI to locate 23-year-old Brian Laundrie, a person of interest in the disappearance of his girlfriend, Gabrielle 'Gabby' Petito.

During the pandemic, people have been spending even more time on their social media and all political parties are hoping to take advantage. Experts across the country are watching to see which party's social media strategy will pay off on election day.