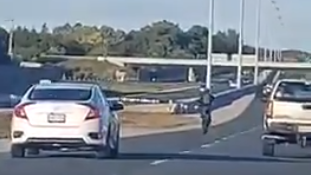 Video still of a motorcycle driver doing a wheelie on Hwy 7/8 in Kitchener. (Courtesy: OPP)
KITCHENER -

A 22-year-old man is facing multiple charges after he crashed his motorcycle on Highway 7/8 in Kitchener.

Provincial Police say at around 6:40 p.m. on Sept. 10, the man was seen doing a wheelie in the eastbound lanes near Fisher Hallman Road.

He crashed the vehicle and paramedics treated him at the scene.

But OPP say before officers arrived, a group of men loaded the motorcycle into a pickup truck and left the scene.

They posted cellphone video of the motorcycle, taken by another driver, on their social media account Saturday.

At approx 6:40pm Sept 10, a motorcycle was east bound on Hwy 7/8 in Kitchener, near Fisher Hallman Road. Rider was doing a wheelie and crashed. EMS treated the rider but before police arrived, a group of males loaded the motorcycle into a pickup truck and left the scene.
1 of 2 pic.twitter.com/cB7adjlif3

The driver, identified as Gregory Shaw-McMahon of Conestoga, is charged with dangerous driving, stunt driving, obstruct and fail to identify.