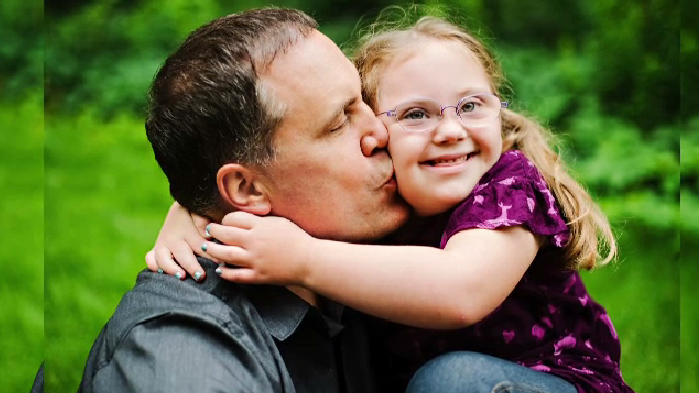 A portrait from the "Who We Are" photo series

Together, they create a series of photos each year, which are then turned into a calendar.

"We use this calendar, not only as a fundraising piece, but also as a way to advocate for people with down syndrome in our community," said Camilleri.

This year's series is called "Who We Are."

"The title is really important to us," Camilleri said. "It was just that simple this year. When we were talking as a group and trying to name the project, we simply wanted to show everyone who people with down syndrome are."

For Camilleri, it is personal.

"Six years ago my friend Kate had a son named Caleb with down syndrome. I was just really moved by her journey with Caleb," she said. "It was a tough start to life, and they weren't sure whether he was going to make it. She fought hard for him, and has advocated for him, just like all of these other families do for their children with down syndrome."

The CDC says even though people with down syndrome might act and look similar, each person has different abilities. That statement is echoed by Camilleri.

"As much as people sometimes tend to look at those with down syndrome as looking like each other or being similar, they're very much like their families they're either born or adopted into," she said.

"Every year we try to break down assumptions or stereotypes around down syndrome that still seem to be out there," said Mary Casagrande, who is the co-chair of the WWDSS.

Casagrade's daughter, Emma, was born with Down syndrome.

"She is full of personality. She loves dancing and skating. She just learned to ride her bike this summer," Casagrande said.

"She is just a regular seven-year-old kid," Casagrande said with a smile. "She loves getting her photo taken and being the centre of attention. When she sees the camera she just turns it on."

Emma is part of the 60 families who took part in this year's calendar shoot.

"This year's theme 'Who We Are', explores the connections between people with Down syndrome and a family member," said Casagrande. "It kind of breaks down that assumption that all people with down syndrome look the same, or have the same interests or abilities, and just shows how unique they really are."

COVID-19 restrictions made this year's project a bit tougher. The group began shooting in June, and it took about three months to complete.

The past five years, the portraits have been taken in Camilleri's studio, but this year, they opted for an outdoor shoot.

"I just knew that's what needed to happen because people with down syndrome are considered in a higher risk group for complications with COVID-19," said Camilleri.

The society was also forced to cancel one of its two fundraisers of the year due to the pandemic, but they're grateful they could make the annual calendar happen.

"I just want to thank Hilary for sharing her fantastic photographic talents with our charity over the last six years," said Camilleri.

"She has a very amazing ability to capture the emotions in the photos she takes. I think pictures really are worth a thousand words."

You can learn more about down syndrome and purchase a copy of the calendar on the Waterloo-Wellington Down Syndrome Society's website.