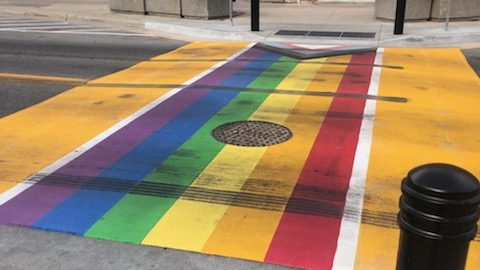 OPP are investigating the vandalization of a Pride crosswalk in Paris, Ont. (Source: Brant County OPP) (May 17, 2021)

KITCHENER -- A new rainbow-coloured Pride crosswalk in Paris, Ont. was vandalized just days after it was unveiled, prompting an investigation in the small town, Ontario Provincial Police say.

Last Thursday, the County of Brant unveiled the Pride crosswalk on Grand River Street North in downtown Paris, a community with a population of about 12,000.

On Saturday, police say they received a report that the crosswalk had been damaged after an unknown person drove on the crosswalk in a manner that left tire marks.

The OPP's Brant County detachment is investigating. Anyone with information is asked to call police.