A row of homeowners on Ahrens Street in Kitchener are disappointed after receiving Sidewalk Snow Removal notices from the city following Monday's snowstorm.

Gary Farkas, who lives on Ahrens Street, said he received a notice telling him he must clear the snow from the entire width of the sidewalk, despite clearing the walkway three times before. 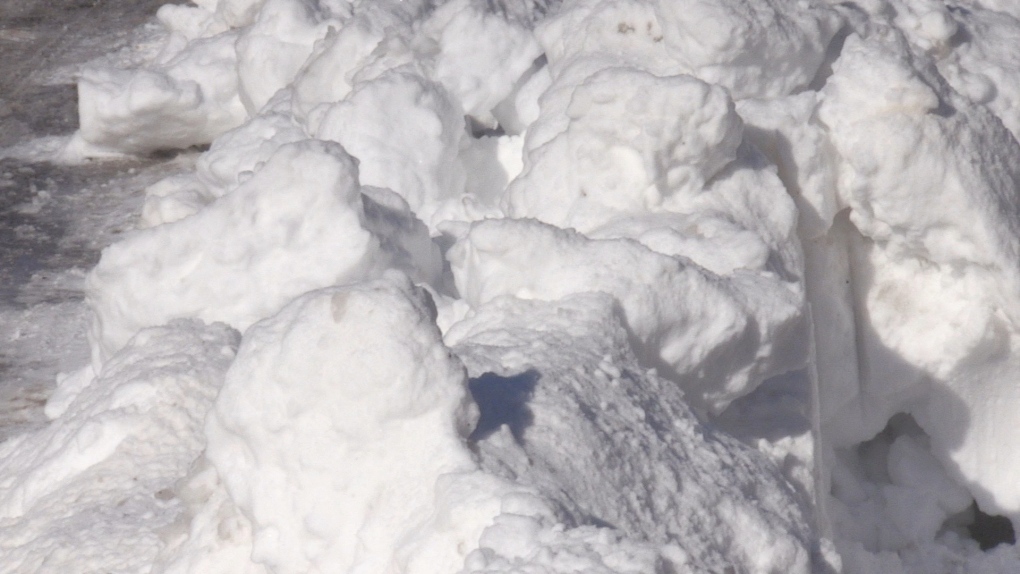 Snow along a Kitchener sidewalk

“The expectation is to clear it down to bare pavement and it's tough to do when the plow goes by,” Farkas said. “It was really discouraging, it was upsetting, because we work hard to clear our sidewalks.”

The city requires residents clear their sidewalks 24 hours after a snowfall. If a complaint is made, a bylaw officer will issue a notice. If nothing is done, the city will hire contractors to clear it, billing the homeowner for the cost. 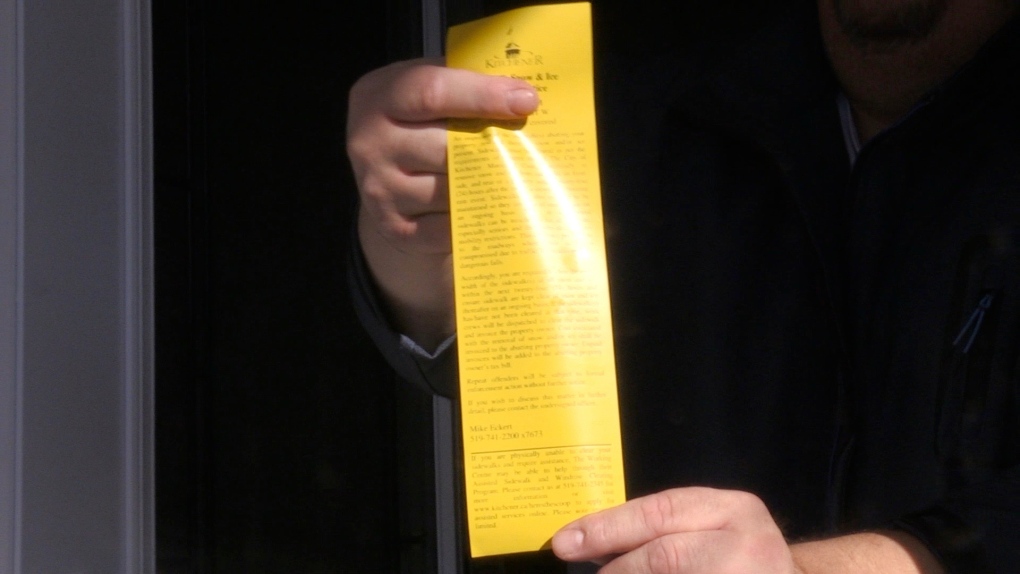 A notice about clearing snow off a Kitchener sidewalk

Farkas’ street is unique, because he does not have any boulevard separating the road and sidewalk, which causes the row of snow left from the plow to spill over onto the walkway.

Across the street, there is a small boulevard. No notices were handed out to neighbours on that side.

“I think it's unreasonable to expect him to clear the sidewalk, plus half of the amount of snow that falls onto the roadway. You just can't do it,” David Dowhanuik, Farkas’ neighbour said.

According to the City of Kitchener, residents and business are responsible for clearing snow and ice from sidewalks around their properties, even after a major snowstorm. However, homeowners with nothing separating the sidewalk and road do have options.

“If they are feeling overwhelmed by what’s been placed there and they feel it’s unreasonable, they always have that option to call in and request an assessment to be done,” Gloria MacNeil, director of bylaw for the City of Kitchener said.

Farkas said since he complained, the city has redacted the notices.

“Once we had a better look at it and had an operations supervisor go by, then yes absolutely it was determined that that would be something that we would look after,” MacNeil said.

Residents in Waterloo are also expected to clear snow within 24-hours and place what they can on their lawns.

“So it is definitely a joint effort for us all. I encourage everybody to help their neighbours that they know need help, but a big thing that we need to do as a city is keep our sidewalks accessible,” Nicole Papke, director of municipal enforcement for the City of Waterloo said.

MacNeil said there are local agencies that can support residents who need help shovelling.

The decision by police to wait before confronting the gunman at Robb Elementary School in Uvalde was a failure with catastrophic consequences, experts say. When it was all over 19 students and two teachers were dead.

Indigenous B.C. filmmaker says he was refused entry on Cannes red carpet for his moccasins

A Dene filmmaker based in Vancouver says he was "disappointed" and "close to tears" when security at the Cannes Film Festival blocked him from walking the red carpet while dressed in a pair of moccasins.

Justice Minister David Lametti is defending the federal government's authority to challenge provincial laws that they believe infringe on the rights of Canadians, after Quebec said Ottawa's reaction to Bills 21 and 96 lacked 'respect.'

As Russia asserted progress in its goal of seizing the entirety of contested eastern Ukraine, President Vladimir Putin tried Saturday to shake European resolve to punish his country with sanctions and to keep supplying weapons that have supported Ukraine's defence.

Around a hundred people gathered at noon Saturday at the empty Vancouver home where Chelsea Poorman’s remains were found late last month to show their support for her family's call for answers and justice.

Canada and Finland won semifinal games Saturday to set up a third straight gold-medal showdown between the teams at the IIHF world hockey championship.

Riot police fired tear gas and pepper spray at Liverpool supporters forced to endure lengthy waits to get into the Champions League final amid logistical chaos and an attempt by UEFA and French authorities to blame overcrowding at turnstiles on people trying to access the stadium with fake tickets on Saturday.

48K without power one week after deadly storm swept through Ontario, Quebec

One week after a severe wind and thunderstorm swept through Ontario and Quebec, just over 48,000 homes in the two provinces were still without power on Saturday.

Explainer: Where do hydro poles come from?

The devastating storm in southern Ontario and Quebec last weekend damaged thousands of hydro poles across the two provinces. CTVNews.ca gives a rundown of where utility companies get their hydro poles from, as well as the climate challenges in the grid infrastructure.