The owners of the Cambridge Mill want to build two tall towers along the Grand River, including one that would be the tallest building in Galt.

Pearle Hospitality, which owners the Cambridge Mill, is hoping to build the towers next to the restaurant along the waterfront.

The proposed 28-storey hotel and 37-storey condo building would be the tallest in Cambridge's historic downtown. 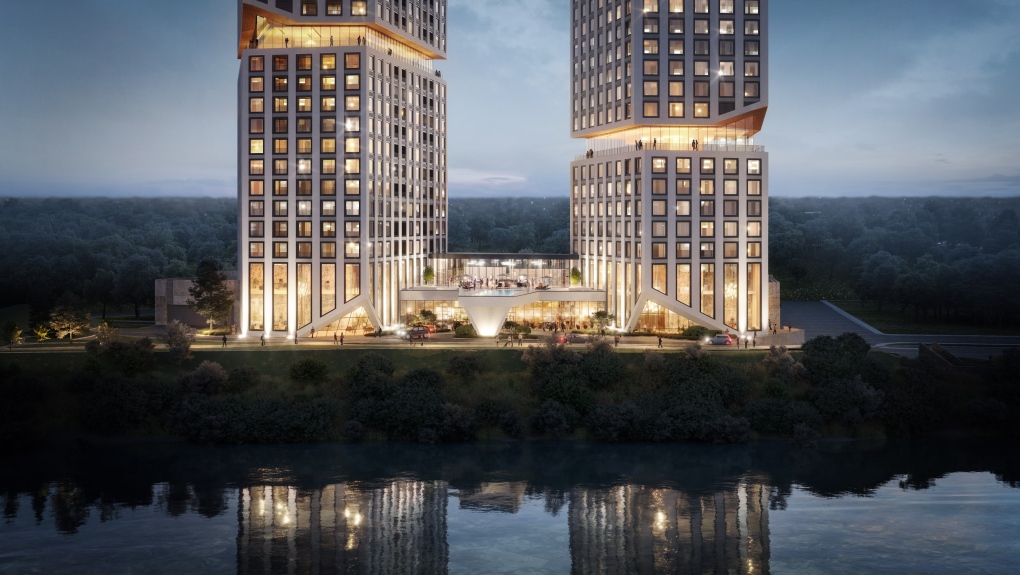 A rendering of a proposal from Pearle Hospitality, the owners of the Cambridge Mill, to build a 28-storey hotel and 37-storey condo building in downtown Cambridge. (Supplied)

Back in 2015, Pearle Hospitality received approval from Cambridge council for a 12 storey building, but was asked to modify the structure.

"To re-look at how the proposed architecture could change to something that's more modern and not competing with the Cambridge Mill, but had its own style," Ciancone said.

Now, the developers are requesting a zoning amendment from council.

Deputy Mayor Mike Mann said that is "to ensure that any development that occurs at that location is properly zoned."

But the proposal is drawing mixed reactions from local residents.

Some say the development would improve the city and add much-needed hotel spaces. Others feel the buildings would be too tall or take away from Cambridge's quaint image.

Pearle Hospitality said it hopes people will focus on the quality and not the height.

"This is going to be a quality project that is not only representative of what we do in other communities, but I think Cambridge is ready for it," Ciancone said.

"What we want to see is intensification in the core, because that's what is important for the growth of our community," Mann said. "(It's) important to hear the feedback to see if these towers are too tall."

A public meeting will be held on June 29 and a recommendation based on that community feedback will go to council in the fall.

Canada is sending an additional 20,000 rounds of ammunition to Ukraine for the Ukrainian military to use in its ongoing defence against the Russians. This ammunition—155mm calibre, as well as fuses and charge bags—is being donated, but comes at a cost of $98 million, according to the federal government.

Power outages caused by the powerful and deadly storm that swept across Ontario and Quebec on Saturday are stretching into another day, as hydro providers warned customers they could be waiting even longer for service to be fully restored.

An infectious disease expert believes monkeypox outbreaks can be contained by using a strategy called 'ring vaccination' – which means vaccinating all the close contacts of an infected person.

Health Canada says it is preparing for the possibility that a shortage of sunflower oil could further strain baby formula supplies in Canada.

11 killed in shooting attacks on 2 bars in Mexico

Russia's theft of Ukrainian grain appears to be ramping up as it continues its war on the country, according to new satellite photos of the Crimean port of Sevastopol.

A report looking into a mapping program the RCMP had access to -- but couldn't open -- during the 2020 mass shooting in Nova Scotia concludes it could have helped contain the killer's rampage.

Actor Amber Heard rested her case Tuesday in the civil suit between her and ex-husband Johnny Depp without calling Depp to the stand.

Workers digging through the rubble of an apartment building in Mariupol found 200 bodies in the basement, Ukrainian authorities said Tuesday, as more horrors come to light in the ruined city that has seen some of the worst suffering of the 3-month-old war.