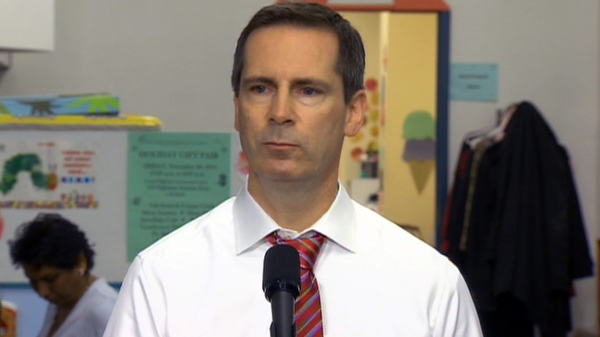 TORONTO - Ontario's opposition parties need to reveal their plans for the future of the province's electricity system or stop complaining about the Liberals' 20-year energy strategy, a combative Premier Dalton McGuinty said Wednesday.

"It's a PFZ; a plan-free zone," McGuinty said in the legislature as he pointed at the Progressive Conservatives and New Democrats.

The government released its $87-billion, long-term energy plan Tuesday, noting hydro rates will jump nearly 50 per cent over five years, more than half of that to pay for green energy projects.

It's time for the Tories and NDP to do the same, added McGuinty.

"Let's move away from their rhetoric. Let's translate that into reality, some hard copy, so that we can compare their numbers to our numbers," he said.

"I think anybody who believes in their magic -- that somehow we can have a clean, modern, reliable system that is going to work for the next 20 years and doesn't cost us a single extra cent -- should be giving their head a shake."

The opposition has never said electricity rates won't rise if they win next year's election, but they are reluctant to state their policy until much closer to the Oct. 6 voting day.

"I've been very clear: at the core of all our energy policy and decisions will be the consumer who ends up paying the bills," said Progressive Conservative Leader Tim Hudak.

"Dalton McGuinty's core concern? It's the special interests who are getting fat off of these rich, subsidized (electricity) contracts."

"(McGuinty's challenge) was all about the government trying to divert attention away from a plan that's full of holes," said NDP Leader Andrea Horwath.

"What we want to see is a real debate about what the options are on the energy file and what those costs are, and the government is refusing to come clean with the answers."

The government can't say how it arrived at a cost of $33 billion to build two new nuclear reactors and refurbish 10 older units, a figure that seems way too low, said Horwath.

"I was asking very clearly: 'Where are those numbers coming from?"' said Horwath. "'Where is the evidence that you actually have a plan in place in terms of that costing?' and I couldn't get an answer."

While Hudak repeatedly refused to say when he would reveal the Tories' energy policy, he said they would continue to phase out coal and build new nuclear reactors, just like the Liberals.

However, he said the Conservatives would not sign solar and wind contracts that are overly generous, like the 80 cents a kilowatt hour the Liberals agreed to pay for small, solar projects when electricity retails for a tiny fraction of that price.

"Premier McGuinty believes energy policy is all about social policy and massive subsidies to multinational corporations and sticking Ontario families with the bill," said Hudak.

The Tories and New Democrats are quick to criticize but slow to say what they'd do differently, noted McGuinty.

"The price of admission to this debate is you've got to have a plan," the premier said in the legislature.

"You can't just continue to offer criticism and commentary from the convenience of the sidelines."