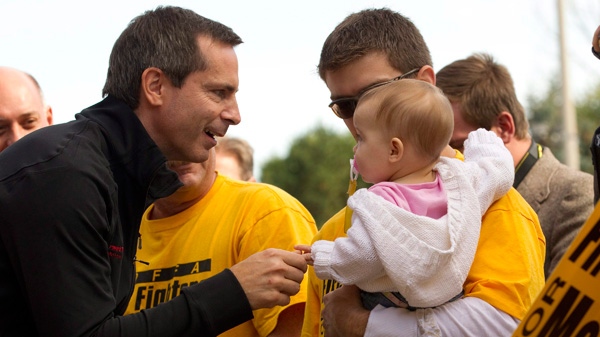 leaders campaign on the last day of the ontario campaign trail

WINDSOR, Ont. - Only the Ontario Liberals will have people's backs in the event of another economic downturn, Leader Dalton McGuinty said Wednesday, the last full day of campaigning before voters cast their ballots.

It's the same theme that helped propel Prime Minister Stephen Harper's Conservatives to a majority government May 2, and one McGuinty has stressed throughout the Ontario campaign.

"There's only one party that has got your back in good times and in not so good times," McGuinty said after touring an industrial shop at St. Clair College in Windsor.

The union leader praised McGuinty for investing taxpayers' money to attract new businesses and bring jobs to Ontario, and noted it was something the Conservatives call corporate welfare.

"We have an opposition party in the Hudak Tories that would suggest the government plays no role in enticing industry to come to the province," said Lewenza.

"The reality today is they play a significant role, and Premier McGuinty has played a leading role in the auto industry."

The Tories opposed Ontario's move to join the federal government and invest billions in the auto sector and "would have cut those workers loose," said McGuinty.

"We did that in the context of the last recession, and throughout that course protected our schools, our health care, retrained workers," he said.

"That's the kind of approach we bring to these kind of things."

McGuinty was at the college to talk about the Liberals' promise to reduce tuition fees by 30 per cent for post-secondary students, and its Second Careers retraining program for older workers. But he clearly did not want to appear overconfident, despite polls showing he could win a third straight majority government Thursday.

"There's a lot of game time left, so to speak, before the buzzer sounds, and our shared responsibility is to work as hard as we can, keep knocking on those doors, keep making those calls, keep engaging people," he said.

"Who knows what the score is? We'll have to wait and see."

The Liberal leader also declined to say how he thinks his campaign has gone, invoking the McGuinty family motto: never look back.

While McGuinty was doing his best to avoid being overtly partisan, Finance Minister Dwight Duncan said voters were "turned off by how negative" Hudak's campaign has been.

The economy has people worried, added Duncan, and they like McGuinty's positive message about how to deal with an economic downturn.

"Who do we want running the show for the next few years," asked Duncan?

"Do we want a guy who is more interested in chain gangs than talking seriously about the economy?"

Even though Lewenza was at McGuinty's side for the Liberal campaign event in Windsor, the New Democrats point out the Windsor Labour Council is backing the NDP in Windsor West and Essex.

McGuinty's final day of the campaign focused on communities along Highway 401 from Windsor to Toronto, the same areas he's concentrated on for much of the past month.