McGuinty plays it safe as campaign nears its end 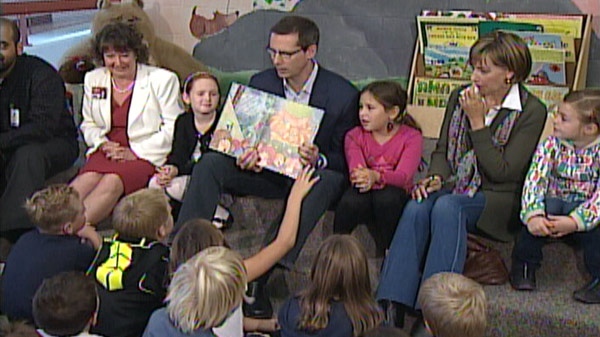 VAUGHAN, Ont. - Liberal Leader Dalton McGuinty was playing it safe Tuesday as the Ontario election campaign neared its end, reading to kids in Cambridge, serving up pizza to Liberal supporters in Bolton, and saying very little that could hurt his chances for re-election.

With polls showing the Liberals seemingly edging ahead of the Progressive Conservatives in advance of Thursday's vote, McGuinty's campaign days seem surprisingly light and tightly scripted.

When the Liberal leader took questions from reporters at a hotel in Vaughan, north of Toronto, he gave virtually the same answer regardless of the question: with economic storm clouds gathering, this is not the time for Ontario voters to change leaders.

"There is tremendous uncertainty to be found in the global economy. As we turn and face that challenge, it's pretty important to have someone at the tiller who brings a strong, steady measured hand."

McGuinty dismissed questions about a possible minority government emerging after Thursday's vote, and said he's been campaigning for a Liberal majority since Day 1 and is still aiming for that goal.

"I'm after as many seats, as much support, as many MPPs as we can have in order to form a strong, stable, Liberal government," he said.

"Now's the time for us to stare into those (economic) head winds with strength and with experience."

McGuinty dismissed questions about the Liberals having the positive momentum while the Conservatives seem to be struggling in the final week of the campaign, and laughed off the fact that Tory Leader Tim Hudak had signed a pledge Tuesday in McGuinty's Ottawa-South riding not to raise taxes.

The Liberals have already pledged not to raise taxes if they are re-elected, but the Tories will force towns and cities to raise property taxes by cancelling Liberal plans to upload services from municipalities, said McGuinty.

"My concern with Mr. Hudak is his solemn commitment to raise property taxes by $500 million," he said.

McGuinty and his wife Terri began the day reading to Grade 2 students at Our Lady of Fatima school in Cambridge, which has a special program designed to encourage boys to read more.

The Liberals wanted to remind voters that test scores and graduation rates are up while class sizes are down. Liberal strategists are also confident they can take Cambridge from the Progressive Conservatives on Thursday, noting they were close in 2007.

The Liberal leader's campaign has been up and down Highway 401 in the past month, and spent a lot of time in ridings around Toronto, many of which switched to the Tories in last May's federal election.

McGuinty has made only one trip to northern Ontario since Labour Day, and skipped the northern leaders debate in Thunder Bay, leading to speculation the Liberals may be in trouble in the north.