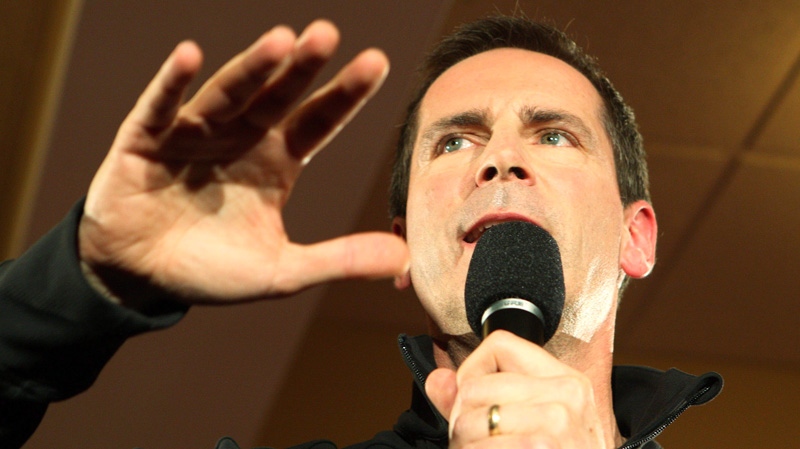 CONCORD, Ont. - Liberal Leader Dalton McGuinty is accusing the Progressive Conservatives of trying to divide voters in the dying days of the Ontario election campaign.

McGuinty was on the attack against PC Leader Tim Hudak on Monday for starting the campaign by claiming a Liberal tax credit for new Canadians amounted to affirmative action for foreign workers, and for digging up another wedge issue in the final week.

The Tories have been distributing a pamphlet criticizing the Liberals over a Toronto school board guideline on how to teach young kids about homophobia.

"I think the responsibility of leadership is to find ways to bring us together."

The Tory leader is grasping at straws because he doesn't have a real plan to create jobs should they win Thursday's election, said McGuinty.

NDP Leader Andrea Horwath said she was disappointed Hudak's original concern about a lack of notification to parents about classroom discussions on homophobia had morphed "into something else" to attract voters.

"Whether it's desperate or whether it's not, it's all about the Liberals and the Conservatives fighting a nasty fight and it's not about the issue itself or the other issues that are facing voters as they make their decision," Horwath said in Toronto.

The Liberal leader returned to the same theme that worked so well for Prime Minister Stephen Harper in the May 2 federal election: now is not the time to change leaders in the midst of economic uncertainty. Governments must be willing to invest in companies and to know when to do it, he said.

"One of the things that Mr. Hudak fails to understand is this is not Economics 101," said McGuinty.

"It's government 2011, and it's a very competitive and aggressive global economy."

McGuinty started the final week of the election campaign by once again visiting factories that produce components for electric cars, which he sees as a key starting point to build a green energy economy in Ontario and create tens of thousands of new jobs.

It's not corporate welfare, as the Tories' suggest, but necessary strategic investments by government, said McGuinty.

"If we get into hard times, I know what a Tim Hudak (government) is going to do. it's going to cut people loose," said McGuinty. "We're saying to families: we've got your back."

The Liberals want to make Ontario the No. 1 producer of electric vehicles in North America, a title the province already holds for conventional cars.

The Liberal leader wrapped up his campaign day at an Oktoberfest event in Kitchener, focusing his efforts once again on southwestern Ontario and the so-called 905 ridings around Toronto.